Stuttgart. The new Porsche LMP1 sports prototype, which will compete in the sports car World Endurance Championship (WEC) and in the 24 Hours of Le Mans from 2014, successfully completed its first rollout today on the Porsche test track in Weissach. Before the eyes of the entire Board of Porsche AG, Porsche works driver Timo Bernhard took his new ‘wheels’ through its initial function check. 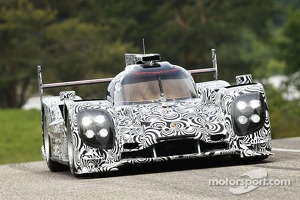 The LMP1 racer turned its first laps on the circuit several weeks earlier than originally planned. “We are well on schedule,” says Fritz Enzinger, Head of LMP1. “Our newly formed team has worked with utmost concentration on getting this highly complex vehicle on the track as soon as possible. This allows us a few additional weeks for more testing and further development. From 2014, the regulations are primarily based on efficiency. This makes the competition amongst engineers more interesting and presents us with completely new challenges.”

Since the decision in mid-2011 to return with the LMP1 racer to top motorsport as a works effort, the Motorsport Centre at Weissach has grown significantly. A workshop and an administration building were built and accommodate around 200 employees who are responsible for the design, assembly and deployment of the LMP1 car. From the 2014 season, the racer will be fielded by a Weissach-based works squad.

I’m very proud that I was the one to take our baby through its first paces today.

“I was involved in the development of the new car right from the outset,” says Porsche works driver Timo Bernhard. “I’m very proud that I was the one to take our baby through its first paces today. Already now the car feels great. I look forward to testing the vehicle in the coming weeks and months with my friend and colleague Romain Dumas.” Bernhard (32) and Dumas (35) are the first two regular drivers in the LMP1 project and will carry out the majority of testing on various international circuits.

“During the development of our new LMP1 vehicle, we faced the same challenge as in the series production development of our road legal cars,” says Wolfgang Hatz, Board Member for Research and Development at Porsche AG. “Our aim was to achieve the best possible efficiency without compromising performance.”

Matthias Müller, Chairman of the Executive Board at Porsche AG, particularly emphasises the benefits customers will enjoy from the development of the high-tech race car. “The engineers were able to start with a blank sheet of paper in the design of the new LMP1 car that was out here today on the Weissach race track for the first time. Hence, they were able to apply many new technologies within the framework of the regulations that will also benefit the customers of our road legal automobiles in the future. After all, there’s a race car in every Porsche.”