Stunning Strakka stung by back marker at Silverstone

Strakka Racing's HPD ARX-03c was retired from race after the car spun on the grass and collided with a Ferrari.

Strakka Racing made a sensational start to the opening round of the FIA World Endurance Championship, the 6 Hours of Silverstone, when it came from 30th on the grid to 7th position in the first six laps.

However, the local team’s Honda Performance Development ARX-03c was pushed onto the grass whilst lapping a back marker on lap 58, and retired with accident damage after the car spun on the grass and collided with the Ferrari. 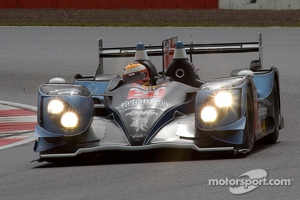 Jonny Kane started the race from the outside of Row 15, and made astonishing progress though the field. He was up to16th after lap 1, 11th after lap 2 and 7th after lap 6. Fearing over a minutes could be lost overtaking the GT and LMP2 cars, Strakka Racing was just 22 seconds behind its LMP1 Privateer rivals and closing.

Jonny handed over to Nick Leventis after a magnificent double stint. It was the first time Nick had driven on a dry track this weekend, and was pushing hard to continue Jonny’s good work when he came up to lap the #61 AF Corse Ferrari F458.

Having got inside the Ferrari in Turn 1, Nick was pushed wide at Turn 2 and onto the grass. The Relentless Energy Drinks-supported LMP1 car spun backwards and at unabated speed came across the track backwards at Turn 3, collecting the front of the #61 Ferrari.

Had it not collided with the Ferrari, the likelihood is that the car would have flat-spotted its Michelin tyres and had to come into the pits for a tyre change. Instead, the impact broke the HPD ARX-03c’s front right suspension and retired instantly.

Jonny Kane: “The first stint reminded me of Le Mans last year, when we started dead last and got back to seventh place. I managed to clear all the GTs and LMP2s a lot quicker than we'd anticipated and in the clear air I could knuckle down and try to catch the P1s.

Our pace was okay, but we started to struggle with the graining on the front tyres a little bit towards the end of the first stint, and when we filled the car with fuel it made it quite a lot worse. I had to manage the tyres a lot and my pace had to drop, but once the fuel came off and the car got lighter the tyres got better again.

We’ve still got a lot of things we want to try on the car, but because of the poor weather we’ve had at Silverstone and during pre-season testing we just haven’t be able to get through the programme. It’s early days with the new car, and it’s certainly got a lot of potential.”

Danny Watts: “Jonny did a great double stint to get us back into the fight for LMP1 Privateers’ and it looked like the car was really well balanced and running with good pace. It was just a case of trying to keep it going around and around, but there is always a danger when overtaking slower GT cars.

It’s a part of endurance racing, but if you get pushed off wide and onto the grass, there is absolutely nothing you can do about it. We wanted to score a good result and get some good points on the board at our home race at Silverstone – but we’re a strong team, we’ll get the car fixed and we’ll start our season at the next round in Spa.”

Nick Leventis: “I was forced wide by a Ferrari on the exit of Turn 1, and once I got onto the grass I was just a passenger. He must have known I was there, because I was flashing my lights, but these things happen and there was nothing I could do. The marshals nearby said it wasn’t my fault.

It’s really frustrating, because I think we had the pace in the car today. I’m really sorry for the whole team that we’ve had to finish the race early like this. This weekend just wasn’t to be for us. But as ever, we’ll learn from this weekend and come back faster and stronger.”

Dan Walmsley, Strakka Racing Team Manager: “Jonny was superb at the start, coming from the back of the grid and putting us up to seventh after just six laps of the race. He was ruthless, took no prisoners, was stunning to watch and cleared the pack in a way which only put us twenty-two seconds behind Rebellion.

We were struggling a bit with the front left tyre, so Jonny did a great job to bring the car in for the first driver change with the pace he did. Nick hasn’t had any dry running at all this weekend, and on his third flying lap he got run onto the grass by a GT car, skidded across the grass and hit the same GT car at the next corner.

It was a bad end to a bad race weekend for us. We arrived at Silverstone with limited pre-season testing, and the weather conditions continued to interrupt our preparations in free practice.

We’re all very disappointed, because we haven’t had the opportunity to show what the car and team are truly capable of. But we’ll go forward from this setback with renewed vigour and determination to make sure we score maximum points at every other race this year.”

Round 2 of the 2013 FIA World Endurance Championship is the 6 Hours of Spa-Francorchamps in Belgium on 4 May.

Lotus Praga LMP2 third day at the 6 Hours of Silverstone