Strong result at the Circuit Of The Americas for REBELLION Racing

REBELLION Racing achieves a solid fourth place finish in the first FIA WEC 6 Hours of the Circuit Of The Americas.

The trio of drivers in REBELLION Racing’s car #12, Nick Heidfeld, Nicolas Prost and Mathias Beche combined great pace with good strategy from the team to achieve a solid fourth place finish in the first FIA WEC 6 Hours of the Circuit Of The Americas. 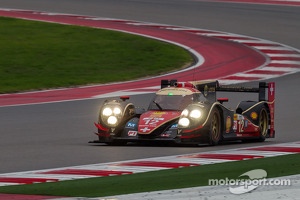 In the first half of the race the Swiss team was able to battle for third place with the defending world champions Audi #1. Despite a permanent attack from the drivers of the #12 Lola-Toyota, the works Audi was ultimately quicker and secured the third spot on the podium in the second half of the race.

With this strong result at the Circuit Of The Americas, REBELLION Racing also record their fourth win in five races in the 2013 FIA Endurance LMP1 Teams’ Trophy, achieving another milestone by winning their second FIA Endurance Trophy for LMP1 Teams in two years.

In less than a month’s time, REBELLION Racing will face a big challenge, with two race events on two sides of the globe on the same weekend.

The next race of the FIA World Endurance Championship will take place on October 20 in Japan at the 6 Hours of Fuji. Andrea Belicchi will make his return to the tracks after his accident at Le Mans three monthes ago, he will be joined by Mathias Beche. The day before, on October 19, REBELLION Racing will also race in the USA for the American Le Mans Series Final race, The Petit Le Mans at Road Atlanta.

The Swiss Team won the 10 hours enduro last year and will try to win the race again for the last appearance of the high performance LM P1 protoypes.

The “3N” driver trio, Neel Jani, Nick Heidfeld and Nicolas Prost, will be reunited for the last time in the same car.

Nick Heidfeld: “ For my first time here at COTA I found the circuit to be great, the first sector is amazing. We were here to learn, and we are happy with what we found. I am massively looking forward to Petit Le Mans and to taking the fight to the Pickett Racing Muscle Milk car. We watched the ALMS race here on Saturday, but as it was not in the same conditions as our race on Sunday, it’s hard to compare the pace of our car and theirs. I’ve never been to Road Atlanta, but everyone tells me that it is great.”

Nicolas Prost: “I took the wheel in the race with not many laps under my belt from practice. I had to re-learn the track in the first few laps, but after that, it was great fun driving. The car was well balanced in race conditions. The gap with the factory cars is nearly the same as we expected, so we were at our right level. I can’t wait to be back at Petit Le Mans, it would be nice to win the race again, especially the last edition with the big prototypes.”

Mathias Beche: “Even if we cannot really fight with the works teams, I am happy with our result today. I want to congratulate the team for their hard work and the good strategy during the race. We had a nice car to race here and we improved by trying new solutions on the car. I am looking forward to the race at Fuji, it will be my first time in Japan. I like to discover new tracks, new countries. It will also be good to have Andrea back in the car again.”

Bart Hayden - REBELLION Racing Team Manager : “We had a trouble free run in the race at the Circuit of The Americas and for a while had some fun mixing it with one of the works Audis. Ultimately, the pace of the factory cars was too much for us today, but we can take some good things away from the weekend. We were on the podium as the LMP1 Privateer winners and we performed well in the pit stops as well as on the track.

We used the test day and free practice sessions to experiment with different setup ideas, some worked, others didn’t. We chose the right way for the race and the drivers were all very happy with the car. It sets us up well for going to Petit next month as well as the remaining WEC races. We’re looking forward to the competition in the ALMS finale and will be hoping to repeat last year’s overall win there.”