Strakka’s all-British team to fly the flag at Silverstone

With a Union Flag proudly displayed on the car’s centre fin, Strakka Racing still aims to begin the eight-race WEC season on a high. 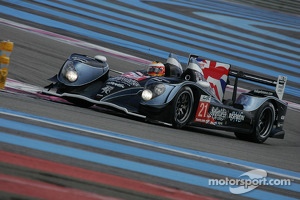 The team admits there is still a lot of performance potential to unlock with the 2013 spec. HPD ARX-03c, as it arrives at its home round of the WEC after running the car just twice this year – at a brief systems shakedown test at Sywell Aerodrome in the UK and at a rain and fog interrupted track test at Paul Ricard in southern France.

With a Union Flag proudly displayed on the car’s centre fin, Strakka Racing still aims to begin the eight-race WEC season on a high. It will be fighting hard at Silverstone to record a strong points-scoring finish, as well as trying to challenge for victory in the LMP1 Privateers’ category.

Victory will be a difficult ask, as its main rival, Rebellion, is running two cars and has more experience of the wider front tyre, having raced that configuration last season.

Yet, in the great tradition of a small British privateer sportscar squad taking on the enormously-resourced manufacturer teams, Strakka Racing won’t let the opportunity pass to also try and snap at the heels of the works Audi and Toyota cars.

And there is even greater incentive for the 31-car grid this year, as the overall race winners will receive the Royal Automobile Club Tourist Trophy.

The first Tourist Trophy meeting was held on the Isle of Man in 1905, and at 108-years old, it is one of the oldest and most prestigious awards in motorsport.

Last year, Strakka came from over a minute down to finish just 0.627 seconds behind the LMP1 Privateer winners, after a 28 lap final stint at qualifying speed by Danny Watts. The team also finished 5th overall.

Nick Leventis: “I can’t wait for the opening round of the World Endurance Championship at Silverstone. As a team we have covered all angles and are as best prepared as we can be for the start of the season. We all want to go to Silverstone and enjoy it. We’d love to win the LMP1 Privateers’ category and it’s important to score a good haul of early points in the championship.

It would be nice to stand on the top step of the podium in front of our home fans, yet staying out of trouble during the race and making a good start to the season is priority.”

Jonny Kane: “As the 6 Hours of Silverstone is the first round of the season, I’m not sure where the Audis and Toyotas will be. They’ll probably a fair chuck ahead of us, so as a team we have to concern ourselves with trying to be the first LMP1 Privateer home. That won’t be easy, as it will be our first race with an upgraded car, and our main rival Rebellion ran with that configuration all of last year.

Having said that, we’re looking in good shape and will go to Silverstone to try and win. Getting through traffic without delay, keeping out of trouble and all the usual stuff associated with endurance racing will be important to our success. We’ve been going through a lot of data since our test at Paul Ricard, and that should set us up well for Silverstone.”

Danny Watts: “Silverstone this year will be a slight unknown for us with a lot of variables. The weather may be unpredictable, so not only have we got to be prepared as drivers on the track, but the guys on the pit wall have to be on top form and strategically picking the right tyres at the right time is going to be vital.

It will be our first race with our upgraded car and we have a lot to learn about the new front end, but our recent test at Paul Ricard was encouraging and we have a great engineering team at Strakka Racing that will undoubtedly unlock its secrets pretty quickly I’m sure. If we can get some good points on the board at Silverstone, that will set us off for a great year.”

Dan Walmsley, Strakka Racing Team Manager: “The FIA World Endurance Championship is going to be fought out over eight months, four Continents and sixty-six hours of racing – it’s a long hard series, and the priority right now is to make the best start we can at our home round.

I think we’ll do well, given all the data we’ve analysed since our recent pre-season test at Paul Ricard. You can guarantee we’ll do our best. Our three drivers love racing at Silverstone and as a team we love racing in front of our family, friends and home fans, so we can’t wait to get out of the traps.”

A final 60-minute practice session begins at 09.00 on Saturday (13 April), followed by 20-minutes of qualifying at 12.40 – where the aggregate time of two drivers per car will determine grid positions. The six-hour race on Sunday (14 April) begins with a rolling start at 12.00.

The ‘Super Endurance Weekend’ at Silverstone hosts rounds of the European Le Mans Series and FIA F3 European Championship, as well as the WEC. Spectator entry to all grandstands is included in the entry ticket, as is access to the Paddock, WEC Fan Area, pit lane walk and autograph signing session. The Parachute Regiment Freefall Team, The Red Devils, will also be dropping in on race day.