The Silverstone-based team enjoyed a successful season in the inaugural FIA WEC last year, when it returned to LMP1 prototype competition for the first time since 2009 with the HPD ARX-03a.

The Automobile Club de l’Ouest confirmed today that Strakka Racing’s entry for the 2013 Le Mans 24 Hours (22-23 June) has been accepted, after the ACO received 71 entries for the 56 available grid slots. 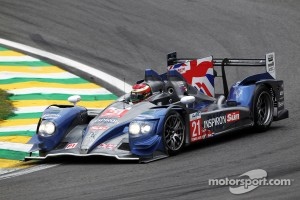 Having made its Le Mans 24 Hour race debut in 2008, this will be the sixth consecutive year that Strakka Racing has raced at La Sarthe, with 5th overall and 1st in LMP2 in 2010 its best result to date.

The Silverstone-based team enjoyed a successful season in the inaugural FIA WEC last year, when it returned to LMP1 prototype competition for the first time since 2009 with the HPD ARX-03a.

The highlights of 2012 were finishing 3rd overall at the 6 Hours of Bahrain and finishing on the FIA Endurance Trophy for Private LMP1 Teams’ podium in all eight races. That display of speed and reliability gave Strakka Racing the runners-up spot in the series, beaten only by Rebellion, which was able to out-points score Strakka with a two-car entry.

In addition to contesting all eight rounds of the 2013 FIA WEC, Strakka Racing will attend the pre-season test at Paul Ricard (March 29-30) and the Le Mans test day (9 June).

Dan Walmsley, Strakka Racing Team Manager: “We are delighted to be returning to the FIA World Endurance Championship for a second year, and we are confident that the strength and stability of our driver line-up, together with the upgrades to our HPD ARX-03c, will enable us to perform at the very highest level once again.

“We enjoyed a great deal of success in 2012, not least our overall podium finish at the 6 Hours of Bahrain. We visited a lot of new circuits last year and were competitive everywhere we raced, yet we were disappointed not to win the LMP1 Privateers’ title.

We’re looking forward to building on the experience we gained in our first season in the WEC, with our sights firmly set on going one better and trying to win the FIA Endurance Trophy for Private LMP1 Teams’ title.

“It’s also a great honour to race at the Le Mans 24 Hours, and having qualified as top LMP1 Privateer there last year, we’ll be aiming to bring that trophy back home to the UK as well.”