Strakka looking to strike back at Spa

This year’s 6 Hours of Spa-Francorchamps will be the most intense WEC meeting ever, with the normal three days of track action condensed into two.

Strakka Racing is determined to reignite its FIA World Endurance Championship campaign by aiming for LMP1 Privateers’ victory at the 6 Hours of Spa-Francorchamps (3-4 May). 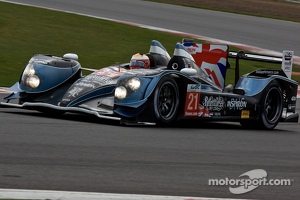 The Silverstone-based team endured a difficult opening race at Silverstone, and despite showing incredible pace with its Honda Performance Development ARX-03c early on in the dry, the car’s WEC debut was cut short after two hours following an incident with a GT car.

Taking the positives of that courageous charge up from 30th on the starting grid to 7th position in just six laps, the team’s all-British driver line-up of Nick Leventis (London), Danny Watts (Buckingham) and Jonny Kane (Thame) head to one of their favourite tracks, the challenging 4.352 mile (7.004km) Spa-Francorchamps circuit, set in the picturesque Ardennes countryside, with sights set on the top step of the podium.

This year’s 6 Hours of Spa-Francorchamps will be the most intense WEC meeting ever, with the normal three days of track action condensed into two. A pair of 2-hour free practice sessions (starting at 09.00 and 14.30) and the two-driver/four lap aggregate qualifying session (19.30), which has been extended to 30 minutes owing to the length of the circuit, all take place on Friday 3 May. Race day (Saturday 4 May) begins with warm-up at 09.00, before the rolling start at 14.30.

Nick Leventis: “There is a big hunger in the team to put our championship campaign back on track. It didn’t start the way we’d hoped for at Silverstone, but that doesn’t alter the ambition and drive everyone at Strakka Racing has to make this a truly great season for the team. We’re very optimistic heading to Spa.

We know the circuit well and we believe the new HPD ARX-03c will be very competitive there. The changeable weather usually plays a big part in proceedings at Spa, and this may also play into our favour as we were very strong there last year in the wet and our 2013-spec car has incredible pace in the dry.

We’ve been busy since Silverstone with our Strakka Performance driver development programme and have enjoyed another very good test at Valencia, so we’re going to arrive at Spa ready to go and with a very positive attitude.”

Jonny Kane: “I always look forward to racing at Spa, and as a team we’ve always done well there. We did more dry running in the race at Silverstone than we did in all our pre-season testing, so we learnt a lot about our new car in those fifty-eight laps.

The weather is getting warmer, and whilst changeable conditions are part and parcel of a Spa race weekend, all being well we should have less trouble keeping the heat in the front tyres. The new two-day race forward shouldn’t be a problem.

I doubt we’ll have any mechanical issues, we very rarely do, so we need to try and avoid any incidents out on track to make sure we start the race having done as much running as possible around Spa. We take a lot of positives from Silverstone into round two of the WEC, and I’m really looking forward to it.”

Danny Watts: “The track layout at Spa should suit our HPD ARX-03c down to the ground, so I’m confident we’ll have a good race weekend. The weather’s normally very changeable, and whilst the new car was very good straight out of the box in the dry, we’ve still got work to do to unlock its potential in the wet.

Having the free practice sessions and qualifying in one day doesn’t really matter from a driver’s point of view, because we just jump into the car and get on with it, but it will make it a very long day for the technicians and engineers.

We’ll have to make sure we keep the car on the track and not sustain any damage, because the timetable only allows for small changes to be done. Getting the maximum amount of track time will be vital, not just for Spa, but because the race is also an important part of our build up to Le Mans 24 Hours.”

Dan Walmsley, Strakka Racing Team Manager: “We were disappointed with our result at Silverstone, but what happened in the race was out of our control – so we head to Spa knowing we have a fast car and the ability to deliver a good result and get our championship challenge back on track.

Like all Michelin runners, we’ll have a new evolution tyre at Spa, which I’m confident our engineering team will quickly get on top of in terms of performance and durability. We’d like to do more running in the dry, but that’s not often the case at Spa – but come rain or shine, we’re feeling positive and quietly confident ahead of race weekend.”