Starting on the 9th April, drivers Jonny Kane, Danny Watts and Nick Leventis are all set to drive the new car ahead of its race debut at the first round of the FIA World Endurance Championship at Silverstone later this month. 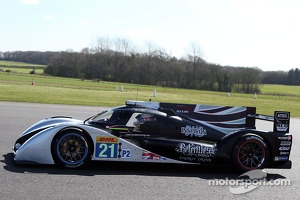 The three day test will also include day and night running with an endurance simulation planned to run from the 10th through the night to the late afternoon on the 11th April.

“After missing the Prologue, everybody has been pushing to ensure we get some track mileage ahead of the first round,” says driver Nick Leventis. “The whole team, both at Strakka and at DOME has worked tirelessly to ensure we get some representative running ahead of Silverstone. We are playing catch up but with three days testing, coupled with the engineering expertise we have in the team this year, we expect to make good progress.”

The Silverstone-based team is working in partnership with Japanese manufacturer DOME to develop the all-new cost-capped coupe this season. Together, both parties have built and run the first LMP2 chassis just six months after signing a contract.