Having secured the runners-up spot in the FIA Endurance Trophy for Private LMP1 Teams by finishing on the podium in all the first seven races, Strakka Racing goes to the final round of the FIA World Endurance Championship aiming to end a great debut season with its LMP1 Honda Performance Development ARX-03a with another giant-killing performance at the 6 Hours of Shanghai (28 October). 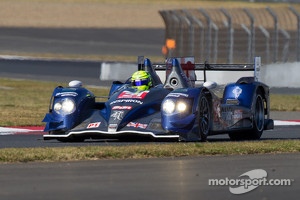 That overall podium result is closely followed by the team’s delight at its reliability and ability to limit its race damage without compromising on pace, as it completes the second half of the WEC, with races in Brazil, Bahrain, Japan and China, without the car returning to its workshop at Silverstone.

The day after the 6 Hours of Fuji, the team completed the pack up and moved on to Shanghai for a few days relaxing before heading to the Shanghai International Circuit to begin to unpack.

Meanwhile Jonny returned home to the UK to see his young family, Nick went to a Strakka Performance training camp in Phuket, Thailand (with fitness trainer Stewart Wild and young British F3 driver Harry Tincknell), while Danny travelled to Hong Kong and Macau for media commitments prior to his 11th appearance at the Macau Grand Prix race weekend (where he’ll race a McLaren MP4-12C GT3 in the Macau GT Cup).

The 6 Hours of Shanghai remain the focus of each driver’s thoughts, regardless of where they are. Danny is the only Strakka Racing driver with previous race experience of the Hermann Tilke-designed 3.387 mile (5.451km) Chinese Grand Prix circuit.

As part of the team’s preparation, he, Jonny and Nick have been around Shanghai on a simulator and studied on-board footage to familiarise themselves with the track – although with many slow and technical corners, it is one of the most difficult tracks on the WEC calendar.

Twenty-eight cars are expected to start the final round of the WEC; eight LMP1 cars and 10 each in the LMP2 and GT categories.

Nick: “I’ve travelled around Asia, but this will be my first visit to China – as it is for the Strakka Racing team. I’ve only been around Shanghai on the simulator, and it appears to be quite a tricky circuit.

Like always, we’ve gathered as much data as we can and we’ll arrive there as best prepared as we can. We’ll certainly arrive on a high, after good performances at Silverstone, Brazil, Bahrain and Japan.

Logistically we’ve managed our damage control on our race car very well, because the car hasn’t been back to the workshop since it left for Brazil and there is a limited amount of parts we can take with us.

We’ve done really well in maintaining a clean bill of health and yet not compromising on our performances, so we’re pretty happy as a team that we’ve done a good job.

We’ve secured the runners-up spot in the Privateer Teams’ category, which is an incredible achievement in our first year back in LMP1 in the World Endurance Championship, and as the lads have been away from home for a long time now, it would be nice to repay them with a great result in China.”

Danny: “After my single seater career came to an end, I did a huge amount of racing in China. I’ve got a lot of friends over there; in fact, one of my best friends lives in Hong Kong and he always organises my trip to Macau each year.

I’ve raced in Shanghai before; I did the Aston Martin Asian Series race there when it was a support race to the Formula 1 Grand Prix in 2008, and I finished second. I enjoyed the circuit a lot because it has a good mix of everything.

It’s got a seriously long straight and plenty of slow speed corners, some of which are hairpins and others that seem to go on forever.

Aerodynamic set-up is going to be very important, and that’s going to be the technical challenge we face in getting the best out of our car.

We may even have to have a different set-up in qualifying to what we have in the race, which will make the work we do in the free practice sessions all the more important.”

Jonny: “I’ve never been to Shanghai before, and it looks like a challenging circuit on the simulator, especially the first corner which keeps going on and on.

Finding the correct entry speed and line will be tricky, and it’s also going to be one of the key overtaking areas, especially lapping GT cars – but that’s all part of sportscar racing and traffic management is something we work a lot on and we’re pretty good at.

Turn 1 is certainly going to be quite exciting at the start of the race as well. Shanghai is a circuit that’s been used in Formula 1, so you can easily find some good on-board footage of the Chinese Grand Prix to help you prepare, and although F1 cars are lighter and faster, it still gives me a good idea as to how our car will react around there.

It’s going to be a real challenge, but we’ve risen to all the challenges this year and I’m really looking forward to the final race of the season. It promises to be a fantastic finale.”

Dan Walmsley, Strakka Racing’s Team Manager: “Shanghai is a fitting end to our first World Endurance Championship year as it epitomises the calendar – it’s got a bit of everything! Another huge straight means we need good speed, but the mix of tightening radius corners and high-speed turns means we need an efficient set-up.

That’s the challenge our engineering team faces and I’m sure we’ll make the right call. We are also trying some developments for 2013 in this final weekend as we continue to push the performance window of the car.

I’m delighted with the team’s effort this year and although we didn’t win the championship it was never likely with the points system favouring two car teams over single entrants like Strakka, and so we’ve done the best we could and are very proud.

Next year the points system changes to bring equality to all privateer entrants and so we expect to challenge for the title next year.”