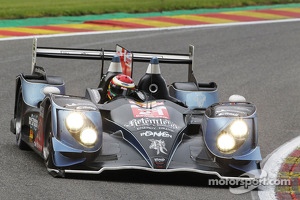 Unfortunately, both of Jonny Kane’s qualifying flying laps were compromised when he encountered traffic, meaning the aggregate time over four laps was 2:03.688. This was +3.317secs off the pace of the pole-sitting #1 Audi, but just 0.410secs slower than the #13 Rebellion.

Strakka made good progress throughout the day, with Danny, Jonny and Nick Leventis making the most of the team’s first dry running with the new HPD ARX-03c. Working through a number of planned set-up changes, the team recorded a 2:05.813 best in the morning’s Free Practice 1 session, followed by a 2:04.309 in the hot and sunny afternoon’s Free Practice 2.

Danny Watts: “I was pleased with my 2:02.969 time in qualifying when I saw it on the dash, but when you see you’re the last LMP1 car on the timing screen, and with a bit of time to find, it’s disappointing. The car felt really good and I exerted every single ounce out of it. I don’t think I could have gone quicker anywhere. It feels really good for a race car, which is the most important part of endurance racing because a six-hour race is long and anything can happen. Strategy will be important tomorrow, because at the moment we lack overall pace.”

Jonny Kane: “Unfortunately I got delayed in traffic on both my flying laps and both times at Pouhon, which is one of the most important corners on the track. It made a big difference to my middle sector times, but that’s how qualifying goes sometimes. Realistically, we’re not as quick as Rebellion this weekend, so we thought it better not to push for another flying lap and save our tyres for the race. The balance of the car felt really good and we’ll be pushing hard in the race.”

Nick Leventis: “We’re on the back foot against Rebellion, especially the #12 car which has really good pace, and it’s up to us to chase them. We feel we got the best out of our car today that we possibly could. It’s been good to get some dry running, which is something we haven’t had leading up to this race, so we’re still on a learning curve and gathering good information ahead of the Le Mans 24 Hours. Our main objective in the race tomorrow is to score points and start our WEC campaign.”

Dan Walmsley, Strakka Racing Team Manager: “It’s hard to feel anything but deflated when the team has worked so hard and so well over the weekend, after a first meaningful dry running of the car, to deliver a car that felt balanced and fast to the drivers but ultimately lacked the pace to compete with Rebellion. We’re not a team who gives up easily, so we’re not beaten yet, but we recognise we face a difficult task tomorrow in the race.”