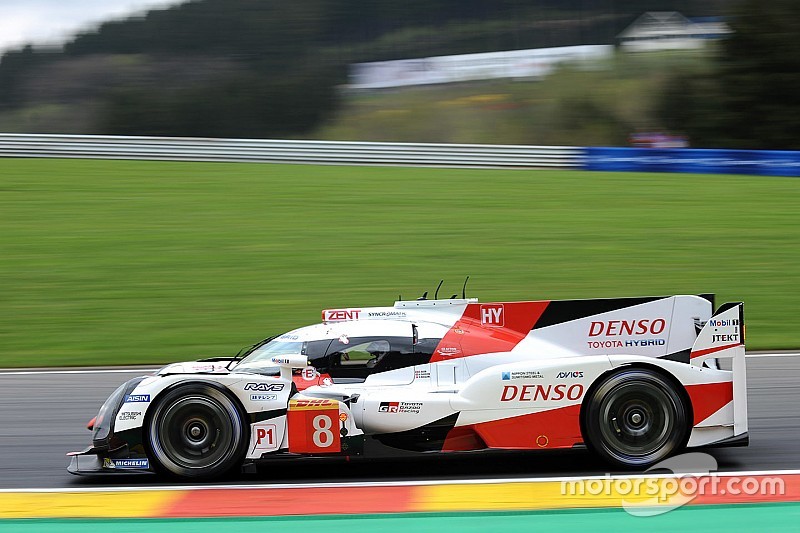 Toyota locked out the top three positions in third practice for the WEC 6 Hours of Spa on Friday morning.

After leading the way in both Thursday sessions, the Japanese marque's two high-downforce TS050 Hybrids set the pace with laptimes within 0.005s of each other.

The session was delayed by 20 minutes for barrier repairs after an accident in Porsche Carrera Cup France qualifying, but once it began, Kazuki Nakajima and Mike Conway set their best times on their first flying laps in the #8 and #7 cars respectively.

The low-downforce configuration #9 car jumped ahead of the two Porsches into third place midway through the session, as Toyota returnee Nicolas Lapierre lapped in 1m55.448s.

Andre Lotterer was quickest of the Porsche drivers, with his best time of 1m56.404 putting the #1 919 Hybrid in fourth, 1.171s down on Nakajima's benchmark.

The #2 Porsche of Brendon Hartley was a further 1.7s back in fifth place.

In LMP2, the pace was set by Alex Lynn in the #26 G-Drive Oreca-Gibson, the Briton recording a best time of 2m01.708s to go two tenths clear of Mathias Beche in the #13 Rebellion car.

The class-winning car from Silverstone, the #38 JOTA Sport-run entry, was third-fastest in the hands of Ho-Pin Tung, more than 1.3s off the pace.

Six LMP2 cars outpaced the sole LMP1 privateer entry, the ByKolles ENSO CLM-Nissan, which was 8.7s off the pace of the hybrids with James Rossiter - fresh from his Fuji Super GT appearance - at the wheel.

Ferrari's pair of AF Corse-run Ferraris led the way in the GTE-Pro category, with Alessandro Pier Guidi putting the #51 488 GTE at the head of the timesheets with a last-minute effort of 2m14.904s.

Sam Bird was just two tenths adrift in the sister #71 car, but some six tenths ahead of Harry Tincknell in the best of the Ford GTs.

The best of the Am-class runners, the #77 Proton Porsche of Matteo Cairoli, was fourth overall among the Am contingent with a 2m15.893s.

That effort was two tenths faster than Frederic Makowiecki's effort in the best of the GTE-Pro 911 RSRs, which was fifth in class behind the second of the Fords.