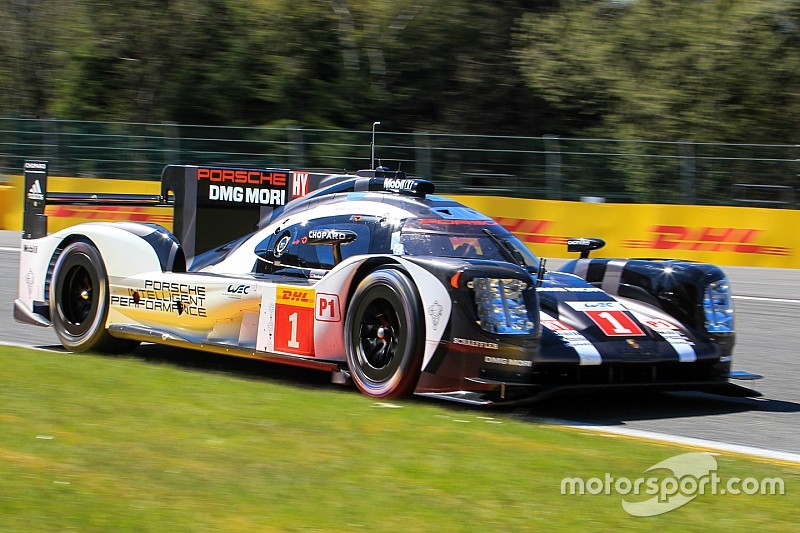 Porsche comfortably topped the opening practice session for the 6 Hours of Spa, the second round of the World Endurance Championship, with Brendon Hartley setting the pace in the #1 919 Hybrid.

The New Zealander topped the times just shy of the halfway mark in the 90-minute session with a best time of 1m58.012s, improving slightly on his teammate Timo Bernhard's early benchmark of 1m58.206s.

Hartley's effort remained the benchmark for the rest of the session, Mark Webber failing to improve when he took over the #1 machine in the final 15 minutes.

The reigning champions finished the session 0.665s up on the sister #2 919 Hybrid, whose best time of 1m58.677s came courtesy of Neel Jani in the early stages.

The #2 car was also shown a black-and-orange flag during the session for a lack of telemetry, which has landed Porsche a fine of €1,000 suspended for the rest of the weekend.

Toyota beat Audi for the honour of best of the rest, with Mike Conway putting the #6 TS050 Hybrid in third place, 1.417s off the pace.

That was enough to edge out Marcel Fassler in the #7 Audi R18 e-tron quattro by four tenths, with the #5 Toyota and the #8 Audi completing the top six.

Rebellion occupied their customary seventh and eighth slots, the #13 R-One lapping some six seconds slower than the #1 Porsche but ending comfortably clear of the #4 ByKolles machine.

In the LMP2 class, it was the #31 Extreme Speed Motorsports Oreca that set the pace, Pipo Derani putting in what would transpire to be the class benchmark of 2m08.974s inside the first 15 minutes.

The best time in the GTE-Pro class was also set in the early stages by the #97 Aston Martin, benefitting from an improved Balance of Performance this weekend, as Jonathan Adam clocked in a 2m19.296s.

Pedro Lamy made it a clean sweep of the two GTE classes by leading the way among the Am contingent in the #98 Aston with a 2m19.748s, which was enough to beat all the Pro entries bar the #97.

Rebellion Racing ready to tackle the 6 Hours of Spa