The 2022 WEC 6 Hours of Spa-Francorchamps may not have been an instant classic, but it certainly was a typical Spa sportscar race. At 1pm local time the race started in dry conditions, but soon enough the capricious Ardennes weather began to play a starring role.

In the #8 Toyota Sebastien Buemi led the early running after both Toyotas passed the polesitting #708 Glickenhaus 007 LMH of Olivier Pla.

But after the first of three red flags for the crash of Miroslav Konopka in the #44 ARC Bratislava LMP2 car, Buemi was forced to park his car after the restart with what the team described as hybrid issues.

A power cycle proving futile, Buemi retired the #8 car on the spot, handing over the lead to the #7 sister car. It was the second retirement in as many races for the Japanese giant, although its misfortune has been evenly spread across both entries so far.

Konopka's off - just as it had started drizzling over one part of the Ardennes circuit but stayed bone dry on the other, a classic Spa-ism - was the first of many. During the first red flag teams were forced to gamble on whether the rain would persist, but soon enough the floodgates duly opened.

The refurbished and repaved circuit proved even more slippery than usual, and when cars started aquaplaning the race was red flagged a second time before the two-hour mark.

During the second red flag period Robin Frijns had cycled into the lead in the #31 WRT Oreca 07 LMP2, and as racing continued the Dutchman continued to impress with his wet weather prowess as he distanced Conway in the #7 Toyota.

The race's third stoppage occurred after three hours and 20 minutes following a crash for Alex Brundle in the #34 Inter Europol Oreca LMP2 machine. Brundle slapped the Turn 9 barriers hard, which prompted repairs to the armco.

Other offs in that period included a scary moment for Antonio Felix da Costa in the #38 JOTA car, who barely managed to keep the LMP2 frontrunner out of the wall, as well as excursions for Prema's Louis Deletraz and Vector Sport's Sebastien Bourdais. Though in fairness to them it would be easier to list the cars that didn't spin or go off track at any point.

With little over two hours to go, racing resumed once again on a circuit that slowly but surely started drying.

On intermediates Toyota's Lopez tried to build a gap on Matthieu Vaxiviere in the Alpine, while half a lap behind them WRT's Rene Rast continued to circulate at a similar pace to the Hypercar class runners.

Lopez made his final pitstop for slicks with 30 minutes to go, safe in the knowledge that Vaxiviere also would have to pit. The Argentine brought the #7 to the chequered flag with a 27s lead, finding redemption after he crashed the car out of March's Sebring 1000 Miles.

Vaxiviere and Alpine teammates Negrao and Nicolas Lapierre settled for second, reinforcing their lead in the championship after winning Florida's season opener.

Polesitting Glickenhaus took a hit when a miscommunication between the team and Pipo Derani caused the Brazilian to make an extra pitstop for grooved tyres. That dropped the boutique manufacturer to ninth behind the LMP2 frontrunners but still third in Hypercar. 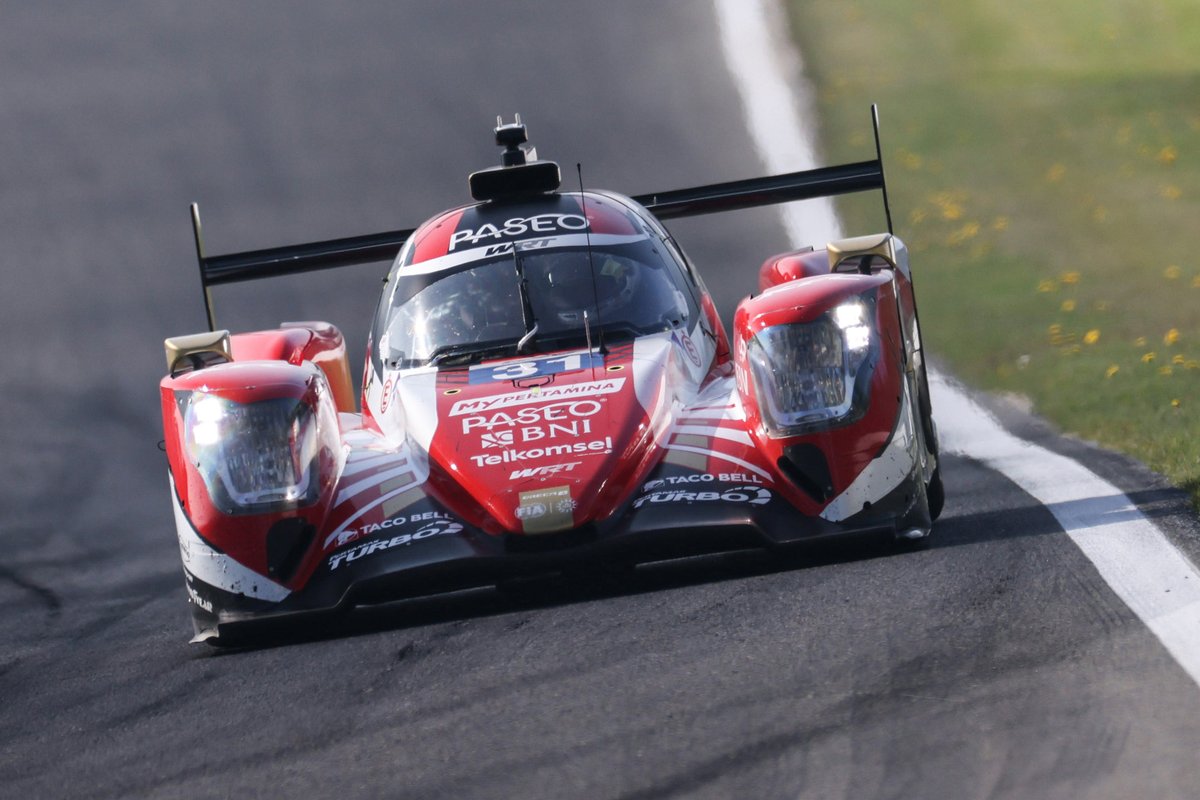 Jousting for the overall lead at one stage, WRT proved the class of the LMP2 field. On home soil the Vincent Vosse-led outfit bagged an overall podium in third with Frijns, Rast and Sean Gelael.

Behind Rast, the #41 sister car of Ferdinand Habsburg fought out a prolonged battle with Phil Hanson in the #22 United Autosports Oreca.

Hanson overtook Habsburg twice but spun off at the Bus Stop chicane to allow Habsburg and teammates Norman Nato and Rui Andrade to finish second, while Will Stevens brought home the #38 JOTA machine he shares with Roberto Gonzalez and da Costa.

American powerhouse Penske also passed the United car for fourth when Hanson made an additional late pitstop under yellow, despite the young Briton's best efforts to re-pass Felipe Nasr late on. 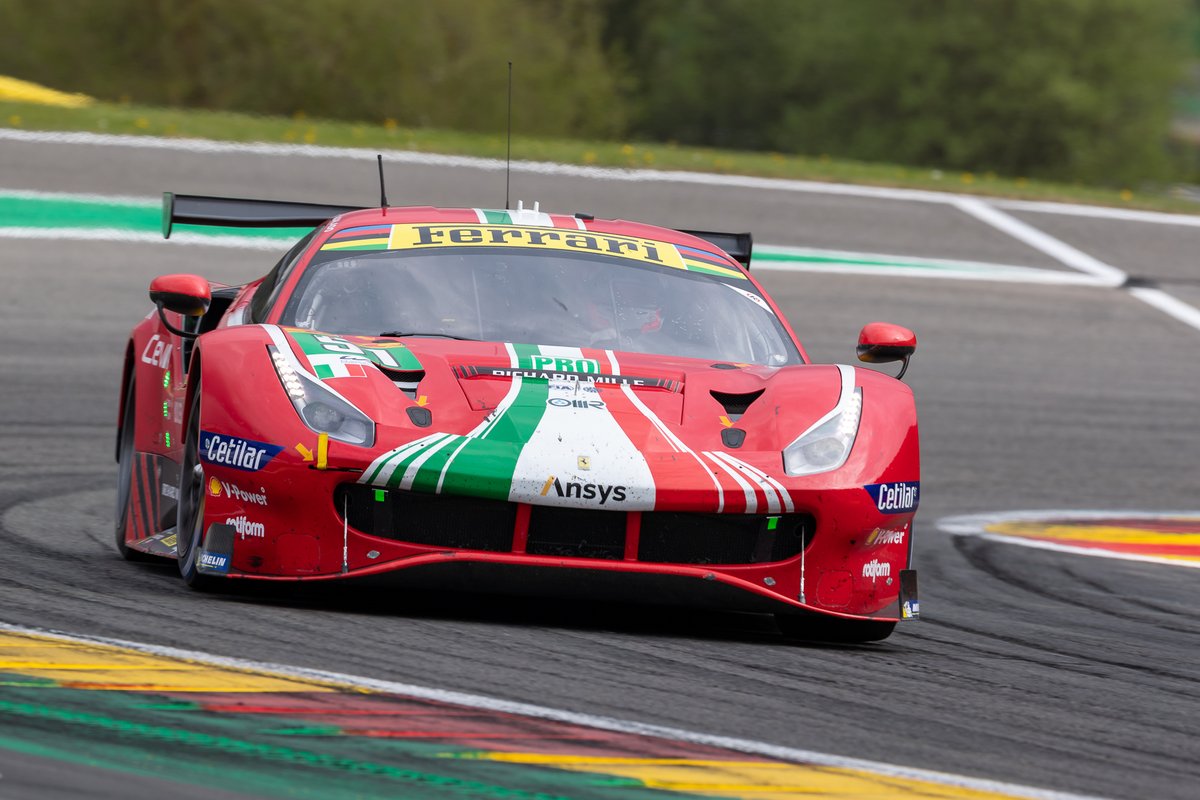 Porsche endured a rough start despite occupying the front row. Kevin Estre outbraked himself in the #92 911 RSR-19 as he tried to pass polesitting teammate Gianmaria Bruni at La Source. While Estre passed Bruni, the pair made contact on exit, which led to a puncture for the Italian.

That forced the #92 to fight the two Ferraris and the Corvette on its own, and through the first stoppage the #52 Ferrari gained a one-lap lead by staying out. That huge gap was cancelled out after the third red flag, allowing the GTE Pro class to resume a straight fight to the finish.

As the track dried up, the #52 Ferrari dropped down the order behind the #51 and the #92 Porsche, setting up a door-to-door duel between Antonio Fuoco and Michael Christensen in the final hour. Christensen found a way past the Italian and then hunted down leader Calado, but their battle was halted by a late full-course yellow.

During a rare 10-minute green flag spell to the flag Christensen immediately tried to pounce but Calado resisted valiantly. Grappling with both slower and faster traffic on the final few laps, Calado continued to soak up the Dane's pressure and beat the Porsche by a few car lengths.

Fuoco closely followed in third in the #52 car he shared with Davide Rigon, with Corvette Racing's sole entry a distant fourth ahead of the #91 Porsche.

In GTE Am, Harry Tincknell, Sebastian Priaulx and Christian Ried took the win in the #77 Dempsey Proton Porsche after a late yellow set up a shootout for victory between Tincknell and the #33 TF Sport Aston Martin Vantage of Marco Sorensen. Nicki Thiim took third in the #98 Northwest AMR Aston.