The FIA World Endurance Championship’s competitors now head to Belgium for the WEC 6 Hours of Spa-Francorchamps on May 2/3.

Following the thrills of the opening round of the 2014 season, the 6 Hours of Silverstone, which saw Toyota Racing take its first 1-2 in the championship, and G-Drive Racing, Porsche Team Manthey and Aston Martin Racing secure their first wins of the year in the LMP2, LMGTE Pro and Am classes, the FIA World Endurance Championship’s competitors now head to Belgium for the WEC 6 Hours of Spa-Francorchamps on May 2/3.

The 7km circuit is a favourite of all drivers and the grid of 28 cars will be using the fast, sweeping venue in the Ardennes as a dress rehearsal for the FIA WEC’s next round which is the 24 Hours of Le Mans in June.

All eyes will be on Toyota Racing’s two TS040 Hybrids to see if they can maintain their winning momentum, and the No.7 of Alex Wurz-Stéphane Sarrazin-Kazuki Nakajima will be determined to see if they can reverse the finishing order with their team mates in the No.8 (Anthony Davidson-Nicolas Lapierre-Sébastien Buemi) who claimed the prestigious RAC Tourist Trophy in Britain. Countering Toyota will be the Porsche Team’s No.14 (Romain Dumas-Neel Jani-Marc Lieb) and No.20 (Timo Bernhard-Mark Webber-Brendon Hartley) Porsche 919 Hybrids, the last taking a podium finish at Silverstone on the marque’s return to the highest level of sports prototype racing. 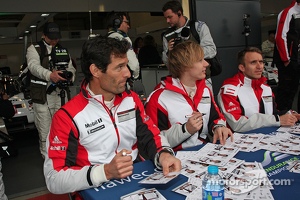 Audi Sport Team Joest, which suffered an uncharacteristically dismal 6 Hours of Silverstone, will return in force as the team is fielding a third Audi R18 e-tron quattro for Filipe Albuquerque and Marco Bonanomi to run alongside its two regular No.1 and No.2 entries which will be in the hands of Lucas Di Grassi-Loïc Duval-Tom Kristensen and Marcel Fässler-André Lotterer-Benoît Tréluyer respectively.

Rebellion Racing will once again field a two car entry with an unchanged line-up, but this time the drivers will be at the wheel of the Swiss team’s all-new Toyota-powered Rebellion R-One. With little testing having been possible before their introduction, expect this race to be a test for the forthcoming 24 Hours of Le Mans.

The LMP2 grid is once again somewhat reduced, but the four entries from Silverstone will be joined by ELMS full-season entrant, JOTA Sport. G-Drive Racing’s Morgan Nissan, in the hands of Olivier Pla, Roman Rusinov and Julien Canal, will be looking for a second consecutive victory in the category, and will expect a strong challenge from KCMG who were somewhat unlucky at Silverstone and who will benefit from the driving talents of Swiss Alexandre Imperatori at Spa. The two Russian SMP Racing entries will be determined to bounce back from a troubled Silverstone, as will JOTA Sport, which was involved in a race-ending accident at Silverstone, and which will benefit from the considerable experience of Audi Sport’s Marc Gené alongside Simon Dolan and Harry Tincknell.

The LMGTE Pro class will see six cars on the Spa grid following the withdrawal for this event of Ram Racing’s Ferraris from the Pro and Am classes. The two Porsche Team Manthey 911 RSR entries, No.91 (Patrick Pilet-Jörg Bergmeister) and No.92 (Marco Holzer-Frédéric Makowiecki) return to a two-man driving line up for Spa as their endurance team mates are racing in the USA this same weekend, while the AF Corse Ferrari 458 Italias of Gianmaria Bruni-Toni Vilander (No.51) and Davide Rigon-James Calado (No.71) are unchanged. However, the FIA WEC extends a warm welcome back to Brazilian Bruno Senna who will line up alongside Darren Turner-Stefan Mücke in the No.97 Aston Martin Vantage V8, while the No.99 Aston Martin Racing entry remains unchanged.

AF Corse will bring a third Ferrari 458 Italia to Belgium, with Peter Mann-Raffaele-Giammaria-Lorenzo Casé performing the driving duties, boosting the LMGTE Am entry to eight cars for the WEC 6 Hours of Spa-Francorchamps. The driver line ups in the other 7 entries remain unchanged from the previous round apart from the replacement of Nicki Thiim in the Silverstone class-winning No.95 Vantage V8 by another returnee to the FIA WEC, New Zealander Richie Stanaway. This change will not in the slightest hamper Danes Kristian Poulsen and David Heinemeir Hansson in their desire to extend their championship lead, and the class is once again likely to be hotly contested amongst the two Vantage V8s, four Ferrari 458 Italias, one Porsche 911 RSR and one Porsche 911 GT3 RSR.

In a two-day festival of sportscar racing the WEC 6 Hours of Spa-Francorchamps weekend also features three races for the Porsche GT3 Cup Challenge Benelux and two races from the Trofeo Maserati. The off track entertainment features plenty to see and do for the whole family with many interactive rides and installations for adults and children, plus a driver autograph sessions and pit walk which are both included in the cost of the entry ticket.