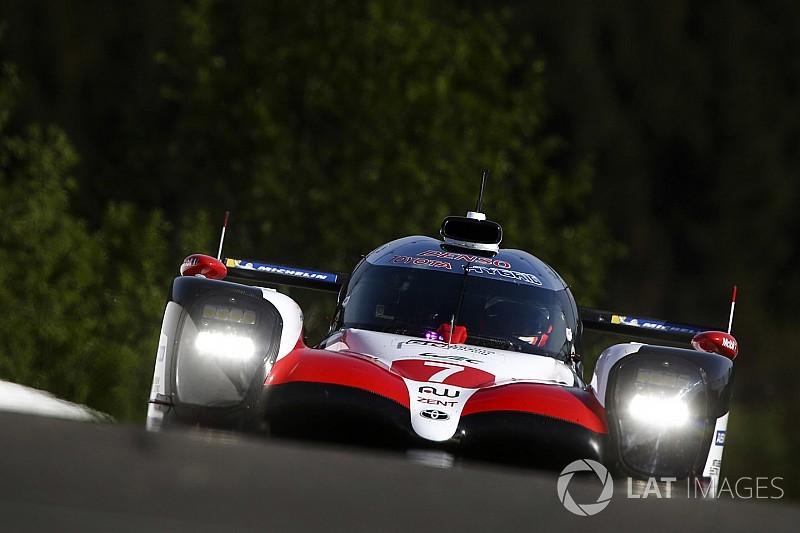 Toyota increased its margin over the privateer LMP1 pack in second free practice for the opening round of the 2018/19 FIA World Endurance Championship season at Spa.

Mike Conway set the pace with a 1m56.172s lap at the start of the session aboard the #7 Toyota TS050 Hybrid, an improvement of more than two seconds over Fernando Alonso's session one best.

Kazuki Nakajima was fastest in the sister Toyota on a 1m56.815s in the 90-minute afternoon session.

That put them comfortably ahead of the best privateer lap of 1m58.835s set by Pietro Fittipaldi in DragonSpeed's Gibson-powered BR Engineering BR1.

The two Rebellion R-13-Gibsons took fourth and fifth positions in the times. Gustavo Menezes posted a 1m59.011s to end up just over half a second up on teammate Neel Jani.

The two SMP Racing BR1s, which are powered by the AER turbo engine, took sixth and seventh, ahead of the ByKolles ENSO CLM P1/01-Nissan.

Stephane Sarrazin set the fastest SMP time with a 2m00.035s before putting the car in the gravel at Stavelot, causing the first of two red flags.

Neither of the Manor Ginetta G60-LT-P1-Mecachromes registered times after completing only one in-out lap apiece.

Pastor Maldonado was quickest in LMP2 aboard DragonSpeed's Oreca 07. His time of 2m02.991s put him three tenths up on Nabil Jeffri's 2m03.306s in the best of the Jackie Chan DC Racing Orecas.

Matthieu Vaxiviere caused the second red flag when he went off in the TDS Racing Oreca at Malmedy corner.

The Ganassi Ford squad again led the way in GTE Pro, Stefan Mucke heading the times with a 2m13.733s, giving him a margin of nine tenths of Gianmaria Bruni's 2m14.647s in the best of the factory Porsche 911 RSRs.

The second cars from Ford and Porsche took third and fourth respectively in the hands of Harry Tincknell and Kevin Estre.

Best of the rest in fifth was James Calado in the #51 AF Corse Ferrari 488 GTE on a 2m15.516s, while Aston Martin improved to sixth fastest with its new-generation Vantage.

BMW's pair of new M8 GTEs were slowest in class.

Ben Barker was fastest in GTE Am for the Gulf Racing Porsche squad, jumping ahead of the #77 Proton Porsche in the closing stages.