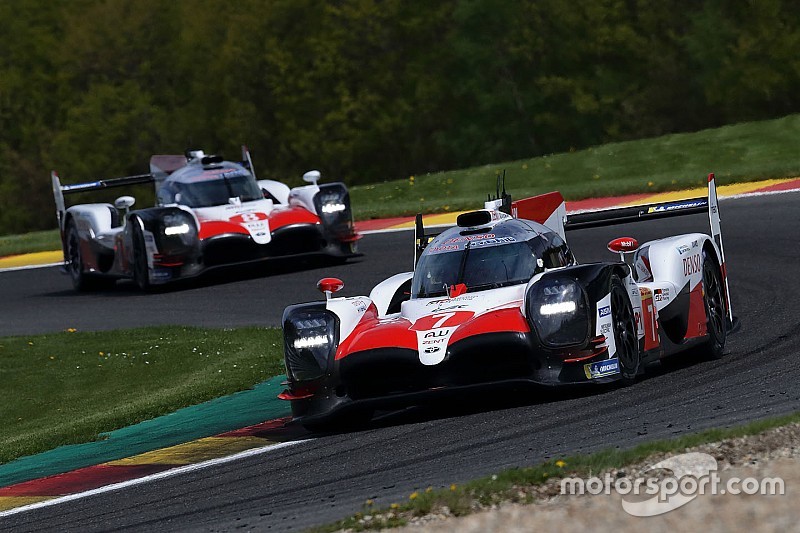 Conway outpaced Alonso by just under half a second on the opening runs with a 1m54.679s compared with a 1m55.143s.

Kobayashi then set the fastest time of the session with a 1m54.488s, just under three tenths up on Nakajima's effort og 1m54.781s.

Neel Jani and Bruno Senna took third in the best of the Rebellion Racing entries with a 1m56.425s average, which was 1.8s shy of the pole.

They ended up just over half a second up on Thomas Laurent and Gustavo Menezes in the second of the Rebellion-Gibson R-13s.

Vitaly Petrov and Mikhail Aleshin took fifth in the only of SMP Racing BR Engineering-AER BR1s to set a time. The sister car trigged an early-session red flag when Stephane Sarrazin stopped on the Kemmel Straight with what was described as an "engine system problem".

The 25-minute session was interrupted for more than half an hour after Pietro Fittipaldi crashed heavily at Eau Rouge in DragonSpeed's Gibson-engined BR1.

The Brazilian was transported to the circuit medical centre after his extrication from the car.

Nicolas Lapierre and Pierre Thiriet scored pole in the LMP2 class aboard the Signatech Alpine Oreca.

Their 2m02.405s average put them just one hundredth of a second up on the 2m02.429s from G-Drive drivers Jean-Eric Vergne and Andrea Pizzitola.

The Ganassi Ford team took one-two in GTE Pro, with Andy Priaulx and Harry Tincknell claiming the class pole ahead of Olivier Pla and Stefan Mucke.

Pla topped the times after the first runs in the #66 Ford GT with a 2m12.420s, which was just under two tenths up on Priaulx's mark.

Richard Lietz and Gianmaria Bruni were less than a tenth behind in third aboard the best of the factory Porsche 911 RSRs on a 2m13.034s average.

The second Porsche took fourth in the hands of Michael Christensen and Kevin Estre on 2m13.034s.

Best of the rest was the MTEK BMW M8 GTE of Tom Blomqvist and Antonio Felix da Costa on 2m14.017s, three tenths up on reigning class champions James Calado and Alessandro Pier Guidi in the fastest of the AF Corse Ferrari 488 GTEs.

The best of the new-generation Aston Martin Vantage GTEs took eighth in the hands of Alex Lynn and Maxime Martin.