After the first World Endurance Championship 6 Hours of Silverstone, the entries for Spa have six hour endurance has increased.

After a thrilling 6 Hours of Silverstone which saw Audi, Rebellion Racing, Delta ADR and Aston Martin Racing secure the first wins the 2013 season, the teams and drivers competing in the FIA World Endurance Championship now head to Belgium for the WEC 6 Hours of Spa-Francorchamps on the 3 and 4 May 2013.

The grid has been boosted to 35 cars with several cars joining the field for the traditional last race before the 24 Heures du Mans in June.

After the emphatic 1-2 win by Audi in the UK, all eyes will be on the nr7 Toyota to see if the new spec TS030 can claw back the advantage that Audi gained in the opening race of the year. Audi Sport Team Joest will be fielding a third Audi R18 e-tron quattro for Lucas di Grassi, Marc Gene and Oliver Jarvis to run alongside the two cars that took a perfect 1-2 at Silverstone, with Allan McNish, Tom Kristensen and Loic Duval lifting the Tourist Trophy on the Silverstone podium.

Toyota Racing will be unveiling their 2013 challenger at Spa, which will be in the hands of Alex Wurz, Nicolas Lapierre and Kazuki Nakajima, while the nr8 TS030 will be a 2012 spec car for Anthony Davidson, Sebastien Buemi and Stephane Sarrazin, who will have to wait until the 24 Heures du Mans test on the 9 June for their 2013 car.

After their class 1-2 at Silverstone, Rebellion Racing will once again field a two car entry with an unchanged line up.The drivers are also unchanged at Strakka Racing, the all British team hoping for better luck in Belgium than they were served up at their home race. 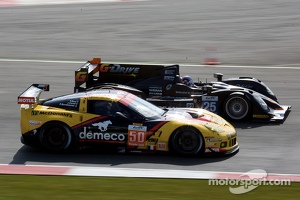 The LMP2 grid is once again the largest in the WEC field with 11 cars entered for the 6 Hour encounter on the 7km Spa circuit. After missing the opening race of the season Gulf Racing Middle East will be bringing one Lola-Nissan for Frederic Fatien, Fabien Giroix and Keiko Ihara. Championship leaders Delta-ADR have confirmed their round 1 winning driver line up and Tor Graves will race with James Walker and Antonio Pizzonia in Belgium.

Belgium’s Bertrand Baguette, racing with Martin Plowman and Ricardo Gonzalez in the nr35 Oak Racing Morgan-Nissan, will be hoping that home advantage will boost his chances of securing a victory for himself and the French team, which is fielding three cars in the LMP2 class.

The LMGTE Pro class will see seven cars on the Spa grid with race winners Aston Martin Racing bringing a third car. Bruno Senna will switch to the nr98 Vantage V8 alongside Fred Makowiecki and Rob Bell, while his place in the victorious 97 car will be taken by Scotland’s Peter Dumbreck. The nr99 Aston Martin will be driven by Canada’s Paul Dalla Lana, Portugal’s Pedro Lamy and New Zealander Ritchie Stanaway. The driver line ups for the AF Corse Ferraris and the Porsche AG Team Manthey 911s remain unchanged from the first race and both works teams will be working hard to close the gap to the Aston Martins.

AF Corse will bring a second Ferrari 458 Italia to Belgium, with Yannick Mallegol, Jean-Marc Bachelier and Howard Blank performing the driving duties, boosting the LMGTE Am entry to 9 cars for the WEC 6 Hours of Spa-Francorchamps. The driver line ups in the other 8 entries remain unchanged from Silverstone, with the all Danish crew in the nr95 Aston Martin Racing Vantage of Allan Simonsen, Christoffer Nygaard and Kristian Poulsen hoping to capitalise on their Silverstone victory and extend their championship lead in Belgium.However they will face opposition from several quarters in a class that features four Ferrari 458s, two Porsche 911 GT3 RSRs, the other Aston Martin Vantage V8s and a Chevrolet Corvette C6-ZR1.

The truly international grid for the WEC 6 Hours of Spa-Francorchamps features 35 cars run by 20 teams representing 11 different countries, with 105 drivers taking part in the race representing 27 countries across six continents.

In a two-day festival of sportscar racing the WEC 6 Hours of Spa-Francorchamps weekend also features three races for the Porsche GT3 Cup Challenge Benelux. The off track entertainment will also be full on, with plenty to see and do for the whole family with a funfair, the FIA WEC fan area autograph sessions and a pitwalk.

WEC wows Liege to promote the 6 Hours of Spa