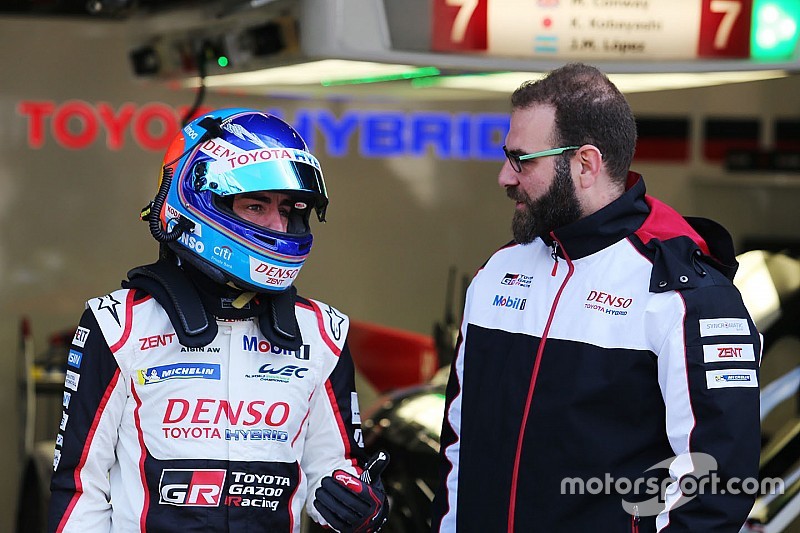 Alonso took over the #8 TS050 Hybrid from teammate Sebastien Buemi 35 minutes into the 90-minute session, and promptly set a best time of 1m58.392s, almost exactly a tenth faster than Buemi.

That put the two-time Formula 1 champion 0.237s ahead of the sister #7 Toyota, whose fastest time was set by Mike Conway.

The best of the non-hybrid privateer LMP1s was the #3 Rebellion R-13-Gibson, which lapped with 0.457s off the pace in the hands of Thomas Laurent late in the session.

That demoted the #10 DragonSpeed BR Engineering BR1-Gibson, driven by Ben Hanley, to fourth, ahead of the sister #1 Oreca-built Rebellion car of Bruno Senna, which was 1.2s slower than the best of the Toyotas.

ByKolles was sixth-fastest with its revised ENSO CLM P1/01-Nissan with Tom Dillmann at the wheel, a further half a second down.

SMP Racing only got its #17 BR1-AER out for a timed run in the closing stages of the session, and was seventh-fastest with Egor Orudzhev at the wheel.

The sister #10 car of Mikhail Aleshin was slower than best of the LMP2 runners, the DragonSpeed Oreca.

Pastor Maldonado set the best time in the secondary class, a 2m03.494s in the #31 Oreca 07-Gibson to go 0.640s faster than Andre Negrao in the Alpine-badged #36 Signatech Oreca.

Manor failed to get either of its Ginetta G60-LT-P1-Mecachrome out for a timed lap, with both the #5 and #6 cars only managing a single installation lap apiece.

Best of the rest was WEC returnee Gianmaria Bruni in the #91 Porsche, albeit six tenths off the pace, followed by Kevin Estre in the #92 911 RSR.

The best of the updated Ferrari 488 GTEs was fifth, 1.3s off the pace in the hands of James Calado, while the best of the new BMW M8 GTEs was sixth with Tom Blomqvist at the wheel.

Aston Martin brought up the rear of the class with its pair of new-generation Vantages.

Porsche locked out the top four spots in the GTE Am division, led by Matteo Cairoli in the #88 Dempsey-Proton Racing entry on a 2m16.601s - sixth overall among the GTE contingent.