Toyota’s position as world leader in hybrid vehicle technology was emphasized earlier this month when the company passed the 5 million mark for sales of hybrid road cars.

TOYOTA Racing’s 2013-specification TS030 HYBRID will make its race debut in this weekend’s Six Hours of Spa-Francorchamps, the second round of the FIA World Endurance Championship.

After finishing third and fourth in the Six Hours of Silverstone earlier this month with the 2012-specification TS030 HYBRID, the team will bring one updated car to Belgium.

The #7 car of Alex Wurz, Nicolas Lapierre and Kazuki Nakajima - competing for TOYOTA Racing for the first time in 2013 after missing Silverstone due to Super Formula commitments - will drive the updated car.

Following their podium at Silverstone, the #8 line-up of Anthony Davidson, Stéphane Sarrazin and Sébastien Buemi will again participate with a 2012-specification car.

The updated TS030 HYBRID features modifications to chassis and powertrain, with increased performance, reliability and serviceability the priorities. 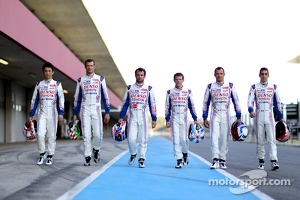 A revised aerodynamic package, including an updated monocoque, delivers improved performance whilst minimising the impact of updated regulations in 2013 which increase the minimum weight for manufacturer LMP1 cars by 15kg.

The TOYOTA HYBRID System - Racing powertrain again uses a unique super capacitor to deliver 300hp of boost automatically, on top of the 530hp generated by a 3.4litre, normally-aspirated V8 petrol engine. Ahead of a completely new development for 2014 due to regulation changes, TOYOTA’s Motor Sport Division in Higashifuji has fine-tuned the powertrain to improve power, efficiency, management of component usage and reliability.

TOYOTA’s position as world leader in hybrid vehicle technology was emphasized earlier this month when the company passed the 5million mark for sales of hybrid road cars.

Yoshiaki Kinoshita, Team President: “Spa is one of two home races for our team, along with Fuji Speedway, as it’s just 120km away from TOYOTA Motorsport GmbH (TMG). So it is the perfect place to debut our 2013-specification car which we expect will show a performance improvement.

Audi demonstrated in Silverstone that we need to make a step to regain the race-winning form we showed last year and I am confident our updated car will deliver. Nevertheless, our 2012-specification car remains competitive and it will be interesting to see how the race plays out.

With many TMG staff members attending this race to cheer on the team, we have extra motivation to succeed so we are aiming to give them a result to celebrate.”

Alex Wurz (#7): “I’m looking forward to racing with the updated car, and also with Kazuki again. Testing has gone well so I’m excited to see what the car can do in race conditions. Our target will be to improve on our Silverstone result and fine-tune the updated car at the same time.

In Spa you can never predict the weather. If it’s dry you have great sensations because it’s a very fast track which is fun to drive; it’s a very good circuit for LMP1 cars. If the weather is mixed or wet it’s very challenging, but I don’t mind because Spa is cool in most conditions.”

Nicolas Lapierre (#7): “At Spa it will be important for us to know where we are compared to Audi. After a disappointing race for the #7 in Silverstone, we want to take advantage of the 2013-specification car. It will be the first time this season we have a three-driver #7 crew which will be a useful training for Le Mans.

I like Spa and have some happy memories so it’s a good place to have our last rehearsal in race conditions before Le Mans. It’s also nice to work with Kazuki again; we have spent time together in testing but our last race together was Fuji last year.”

Kazuki Nakajima (#7): “I’m delighted to be back competing for TOYOTA Racing; we had productive tests but now I am ready to race again. My most recent memory of the WEC is winning at Fuji Speedway last year so I hope to keep the good run going. Spa is a great track but it has never been good for me in terms of results.

It’s always nice to drive such an exciting lay-out and I aim to improve my record there. We will have two cars with different packages so it will be interesting to see the comparison, keeping in mind that we are preparing for Le Mans.”

Anthony Davidson (#8): “I’m looking forward to Spa. The last time I was there in LMP1 in 2011, I won the race. I don’t care what the weather is, wet or dry, it’s always changing there and I think we are fast in both conditions. From the technical side it will be really interesting to compare our updated car with the 2012 version, and also with the Audis.

It gives us a taste of where everyone stands. The #8 crew again has the 2012 car with high-downforce aero package so we hope to be competitive at Spa. I’m looking forward to another strong race.”

Stéphane Sarrazin (#8): “I love racing at Spa! With an LMP1 car it’s just great and I can’t wait to experience the hybrid system on the TS030 HYBRID at Spa for the first time. This is the last race before Le Mans so it’s an important weekend. I hope we will be able to fight at the front and the aim of course is to win.

I already won the Spa 24 Hours in 2008 when the race was a mix of all kinds of weather. I’m ready for anything this weekend and we will do our best for the team to improve on our Silverstone’s result.”

Sébastien Buemi (#8): “After my first WEC podium at Silverstone I’m delighted to go to Spa. I like Spa, it is one of the most beautiful circuits in the world. I know it very well as I raced there in many series but it will be my first time with an LMP1 so it will be a challenge to deal with the traffic.

Competition will be once again very tough. Our team-mates in the #7 will have the updated car so we hope they will make a big step forward. But even with the 2012-specification car, the #8 will be pushing for a good result and we still expect to be competitive.”

Strakka looking to strike back at Spa