Solid run for Strakka at Spa

World Endurance Championship continues next month’s on the 24 Hours of Le Mans, where Strakka’s LMP1 ARX-03c and 2012 ALMS LMP2 champions Level 5 Motorsports both will return to the Circuit de la Sarthe.

A consistent and solid World Endurance Championship effort from Strakka Racing saw the British team finish seventh overall and third in the privateer LMP1 category in Saturday’s Six Hours of Spa, the final WEC race prior to June’s 24 Hours of Le Mans. 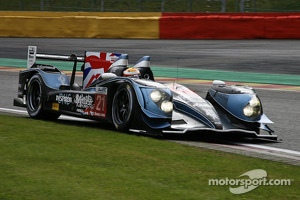 The Strakka driving trio of Jonny Kane, Nick Leventis and Danny Watts had a nearly trouble-free run in the Honda-powered ARX-03c throughout six hours of racing at the challenging Spa circuit. Only an unfortunately-timed safety car period, and light contact from an LMP2 car in the closing hours requiring additional time for repairs during the team’s final pitstop, cost the team vital track position in relation to rival privateer squad Rebellion Racing.

Jonny Kane (Strakka Racing HPD ARX-03a) finished 7th in LMP1 and 3rd in the privateer category: “Our race pace was a bit closer than we had in qualifying and the car felt really good, so a lot of positives have come out of the Spa race and it’s very encouraging.

The car was very well balanced, had good grip, ran faultlessly and I had no issues whatsoever. Le Mans will be a different story, because anything can happen in a 24-hour race.

I can’t wait to go testing there, because the low-drag kit has always been very strong around there and we’re confident that will bring us another step closer.”

Steve Eriksen (Vice President and COO, Honda Performance Development) on Saturday’s WEC race at Spa: “The solid effort from Strakka Racing at Spa is encouraging, and good preparation for next month’s 24 Hours of Le Mans.

There, the team’s consistency and excellent preparation should be a strong factor in its favor. Our Le Mans configuration is very encouraging for both LMP1 and LMP2, and we look forward to Level 5 joining the HPD effort, as we seek to build on our previous successes there in 2010 and 2012.”

Mücke fourth an the second WEC race in Spa-Francorchamps