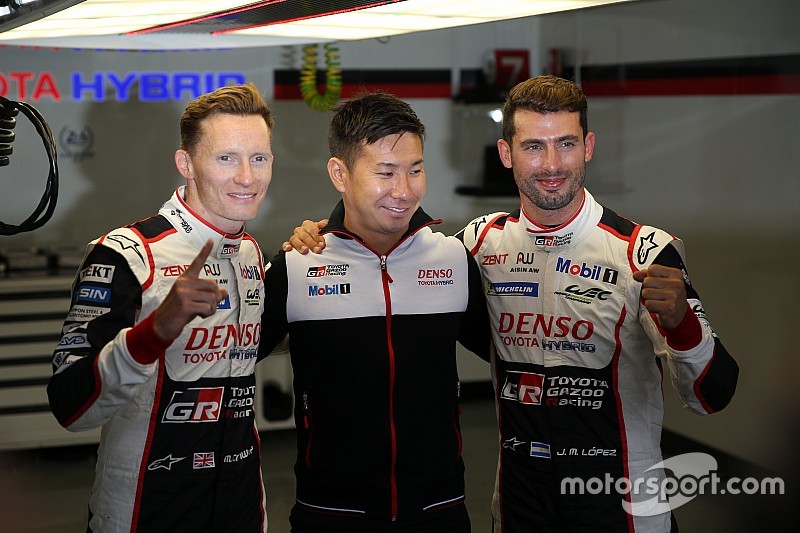 The #7 Toyota claimed its first FIA World Endurance Championship pole position of the season for this weekend's Silverstone round.

The Briton set his 1m36.769s, which stood as the fastest lap of the session, on his second run after aborting his first go at a time.

Conway said: "It's nice to get a pole after losing one at Spa [to a technical infringement]. I made a mistake starting the lap and another in Turn 4 [the Loop], so aborted the lap and went again.

"I was conservative on track limits, but fortunately it was enough."

The 1m37.362s lap Nakajima lost to a track limits violation wouldn't have altered the order at the top of the timesheets.

The Toyotas ended up more than two seconds clear of the best of the non-hybrid privateer LMP1s, as Vitaly Petrov and Jenson Button took third in the best of SMP Racing's AER-powered BR Engineering BR1s.

Their average of 1m38.932s was seven tenths up on that of the sister car driven by Stephane Sarrazin and Egor Orudzhev.

Jazeman Jaafar and Nabil Jeffri took the class pole in the #37 Oreca 07 with a 1m44.896s average, which was just over a tenth ahead of teammates Stephane Richelmi and Gabriel Aubry.

Stefan Mucke and Olivier Pla claimed the GTE Pro class pole for Ford by just over a tenth from a resurgent Aston Martin.

That gave them an average of 1m55.727s, which was just clear of the new Aston Martin Vantage GTE shared by Alex Lynn and Maxime Martin.

The two Aston drivers were separated by under a tenth on their way to a 1m55.805s average, while the second Vantage driven by Nicki Thiim and Marco Sorensen was three tenths behind on 1m56.103s.

The second of the Ganassi Fords ended up fourth on a 1m56.204s in the hands of Andy Priaulx and Harry Tincknell.

Porsche drivers Michael Christensen and Kevin Estre took fifth ahead of Ferrari pairing Sam Bird and Davide Rigon, with Augusto Farfus and Antonio Felix da Costa ending up seventh in the best of the BMWs.

The GTE Am pole was taken the Project 1 Porsche 911 RSR driven by Jorg Bergmeister and Egidio Perfetti.

The WEC 6 Hours of Silverstone will be streamed live on Motorsport.tv from 11am GMT on Sunday.

Aston Martin: Improved form not just down to BoP