Silverstone: Second row on the grid for the two Porsche 919 Hybrids 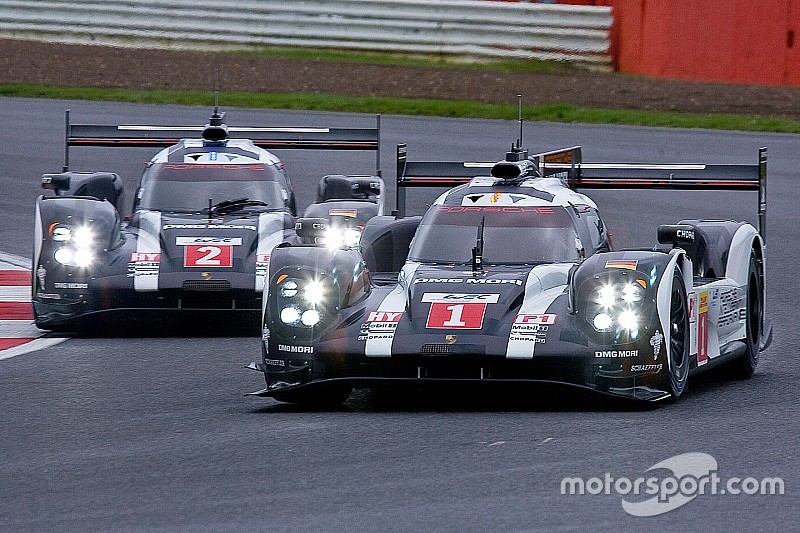 On a drying track, with very low ambient and track temperatures, the second row went to Porsche.

Stuttgart. The two Porsche 919 Hybrids will start third and fourth on the grid for the opening round of the FIA World Endurance Championship (WEC) at Silverstone on Sunday. The reigning World Champions, Timo Bernhard (DE), Brendon Hartley (NZ) and Mark Webber (AU), qualified third ahead of their teammates Romain Dumas (FR), Neel Jani (CH) and Marc Lieb (DE). On a drying track, with very low ambient and track temperatures, the front row went to Audi.

In the WEC the average of the respective best laps of two drivers counts for the grid position. In Silverstone Hartley/Webber (car number 1 / 1:54.150 minutes) and Dumas/Jani (car number 2 / 1:54.266 minutes) were the qualifying drivers.

In the morning, during the third free practice session, the Porsche prototypes only did one installation lap each with Webber and Jani at the wheel. The session was stopped early by the race director because of snow.

Fritz Enzinger, Vice President LMP1: “For more than a year now we have locked out the front row – since the 2014 finale in Brazil we have always started first and second. Now we will go and analyse why today we couldn’t do better than P3 and P4. For tomorrow different weather conditions are predicted and, for sure, we will make the most of it.”

Andreas Seidl, Team Principal: “Our outstanding series of 11 consecutive pole positions came to an end today. Audi put in a better performance in the conditions we encountered. We will now focus on our race preparation, and expect a dry race tomorrow. Given how the free practice sessions went on Friday, we believe we are well prepared. It is going to be interesting to find out where we are compared to the competition on Sunday.”

Timo Bernhard (35, Germany): “I’m very confident. Despite the difficult weather conditions with some rain on Friday and even snow on Saturday, we managed to prepare well for the race. The new aero package gives as more downforce in the fast corners – Copse, Maggots and Beckets are really cool now. In return we have more drag and a lower top speed on the straights.”

Brendon Hartley (26, New Zealand): “The conditions were very cold and it was even snowing in the morning. I think we made the right call to keep our full wets on the car in qualifying to try and get some temperatures into them. I had some traffic on my last lap, otherwise I could have definitely improved although not enough for the front row. In these conditions Audi was better than us.”

Mark Webber (39, Australia): “I think we got the maximum out of our 919 Hybrid and Audi obviously was a bit stronger than us. It was the first time we had put the full wets on the car and now we look forward to race day.”

Romain Dumas (38, France): “The track was pretty wet. I was driving behind Brendon for a long time. In the end perhaps we could have changed onto the intermediate slicks from Michelin.”

Neel Jani (32, Switzerland): “Due to the weather conditions it was a difficult qualifying. Perhaps in the end we were on the wrong tyres, and a little too close to the sister car. This decision wasn’t ideal, and also we had some spray. We were aiming for more than P4.”

Marc Lieb (35, Germany): “We went in a slightly different direction with the set-up to that of the sister car, and this wasn’t the best path. Then the weather didn’t allow us to try anything further, but we benefitted from what our teammates had found out. We should be alright for the race.”

Pole position for Audi in Silverstone !

Graeme Lowdon: "Manor must be disappointed with start to 2016 F1 season"