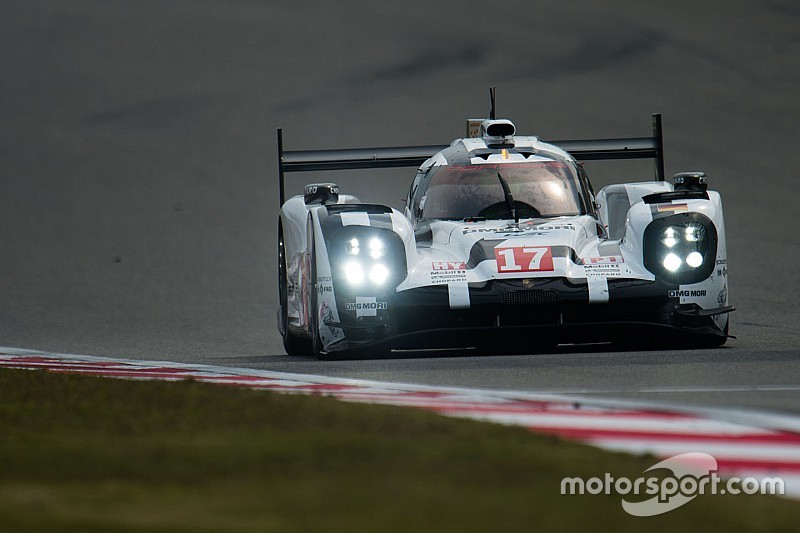 Porsche scored another 1-2 in qualifying to maintain its 100 percent pole record in the 2015 WEC as Mark Webber, Brendon Hartley and Timo Bernhard stretched their title lead to two points.

The championship-leading #17 Porsche 919 Hybrid, driven by Webber and Hartley in qualifying, set an average time of 1m42.719s.

Hartley, who has been the quickest driver in the #17 so far this weekend fired in an ultimate best of 1m42.621s to lay the foundations for his and his teammate's fourth pole position of the season so far.

Such was the advantage that the #17 Porsche enjoyed that Webber was able to call it a day with five minutes to go.

The #17 Porsche had 0.769s in hand over the sister #18 car, which made an unexpected pit stop after the first lap out of the pit. Marc Lieb and Romain Dumas were on qualifying duties this afternoon.

Audi was unable to get anywhere near the Porches at Shanghai and will thus line-up third and fourth. Marcel Fassler was baulked on one of his quick laps, but Audi struggled to get within a second of their German rivals this afternoon.

The #7 Audi R18 e-tron quattro, in the hands of Fassler and Benoit Treluyer, starts fourth, behind the sister car driven by Loic Duval and Lucas di Grassi.

Toyota finished in its now customary fifth and sixth places. Sebastien Buemi and Anthony Davidson qualified the #1 TS 040 Hybrid ahead of their sister car, which had Alex Wurz and Mike Conway on duty this afternoon.

LMP2 pole was claimed for a third successive race by Sam Bird and Julien Canal in the #26 G-Drive Ligier-Nissan. Canal fought back superbly from an accident in the final Free Practice session this morning, while Bird set easily the fastest individual class lap on a 1m51.984s.

The G-Drive Racing Ligier was almost six tenths of a second quicker than the KCMG ORECA 05-Nissan. The two title rivals will start from the front row just three weeks after a series of controversial incidents at Fuji.

Matt Howson and Nick Tandy qualified the car for the Hong-Kong-entered team as they attempt to hunt down a now 13-point deficit to the G-Drive trio.

Gianmaria Bruni and Toni Vilander took the LMGTE Pro class pole position and, in so doing, secured the extra to point close further on their title rivals.

First Vilander and then Bruni qualified their Ferrari 458 Italia to set a combined average of 2m02.243s. Bruni set the overall fastest lap with a scorching 2m01.987s.

Davide Rigon and James Calado ensured the Prancing Horse locked out the front row as they placed second in the #71 car.

Third in LMGTE Pro was the #99 Aston Martin V8 Vantage with Alex MacDowell and Fernando Rees on qualifying duties.

Porsche Team Manthey ultimately didn’t have the pace of the Ferraris in Shanghai and the pair of 911 RSR’s qualified fourth and fifth, with the Patrick Pilet/Frederic Makowiecki car just pipping Michael Christensen/Richard Lietz.

The team elected to save fresh rubber for the race tomorrow, a strategy which it has employed at several rounds so far this season.

LMGTE Am saw Aston Martin locking out the front row, but it took a last minute wonder lap by bronze driver Paul Dalla Lana to ensure a fourth pole of the season.

The Canadian turned in a last lap 2m03.484s lap which meant that, combined with Pedro Lamy’s earlier effort, it resulted in an average of 2m04.725s. This was just a fraction faster than fellow Aston runners Liam Griffin and Stuart Hall in the #96 Vantage V8.

Opinion: What will be Darren Cox's legacy?