A third victory of the season at the 6 Hours of Shanghai was the best possible way for Larbre Competition to secure the inaugural FIA World Endurance Championship GTE Am Trophy last weekend (28 October). 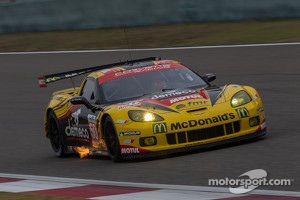 Patrick Bornhauser, Julien Canal and Pedro Lamy scored a commanding win aboard the French outfit’s #50 Corvette C6.R while their team-mates Jean-Philippe Belloc, Christophe Bourret and Pascal Gibon came home fifth in the sister #70 machine. It’s the combined efforts of both these driver crews throughout the season that has helped Larbre Competition clinch the Teams’ title by an impressive 26 points.

This accolade is just the latest in a series of international championships secured by Larbre Competition which has seen its Corvette programme also score back-to-back ILMC titles in 2010 and ’11, as well as successive victories at the Le Mans 24 Hours during the past three years.

Julien Canal, #50 Corvette C6.R: “I took the start but initially lost some time by being cautious due to the frantic battling ahead of me. The second stint worked out much better though and the car also had improved balance. The grip seemed to increase with every turn and it was a great pleasure to drive. When Patrick finally crossed the finish line I was absolutely delighted to be among the entire team, congratulating everyone and shedding a tear of joy!”

Pedro Lamy, #50 Corvette C6.R: “Once again it was with great pleasure that I joined Larbre Competition, as well as Julien and Patrick, in Shanghai following our Le Mans 24 Hours victory together earlier this year. It’s an interesting circuit and one that I really enjoyed driving during my double stint. Earlier in the weekend it was difficult to find a good set-up but the grip levels seemed better on Sunday. I am very happy to have scored a third victory following the success at Le Mans and Mount Fuji. Of course we also celebrated winning the WEC GTE Am class title to end the season on a high.”

Patrick Bornhauser, #50 Corvette C6.R: “Shanghai is not one of my favourite circuits and I didn’t particularly enjoy driving the car there due to struggling with the set-up. But at least I managed a solid and consistent double stint that not only contributed to race victory but also Larbre Competition winning the world title.”

Jean-Philippe Belloc, #70 Corvette C6.R: “Despite being a nice circuit to drive, Shanghai is very demanding on front tyres. We had little time to set-up our car and as a result struggled to find the optimum performance. The race therefore wasn’t easy but we can still be proud of our collective effort. I believe it was our most complete performance of the year given the context. I had a moment during my first stint when an LMP2 prototype looked to pass on the outside but ended up falling back without giving me enough room. Contact was inevitable but fortunately the car was fine. It is very satisfying to have contributed to winning a world championship and been great to work with Christophe and Pascal. Congratulations and a big thank you to everyone.”

Christophe Bourret, #70 Corvette C6.R: “It’s been a magical season that culminates with much emotion. What a human adventure between three blokes who have experienced a lot of difficult and fantastic things together. Nobody can take this away from us: it’s ours! Personally I have learnt a lot and believe I have progressed throughout the year thanks to the help of Jean-Philippe and Xavier (the ‘wizard’ from Font-Romeu). My performance increased as the season continued and I have enjoyed the time of my life at each of the magnificent circuits visited, finishing in Shanghai where I had an awesome time at a brilliant track. While it wasn’t our best result it was by far the team’s most complete race. Finally, I would like to thank all our mechanics and engineers who have performed at a consistently high level. We are world champions. Thanks to all.”

Pascal Gibon, #70 Corvette C6.R: “Shanghai is a very technical circuit but one that I really enjoyed driving during qualifying and the race. I’ve gained a lot of memories and new experiences this year: it’s been a great adventure that ends with the team crowned world champions! I’d like to say a huge thank you to all involved in the programme.”

Jack Leconte, Team Manager: “Since scoring victory at Fuji, the Larbre Competition team took some time off across Asia to sample dream beaches, surfing, diving, golf and elephant rides as a way of relaxing before the rush of Shanghai.

“The two Chevrolet Corvette C6.Rs left our workshop at Val de Vienne circuit at the end of August and, after an eight week round-the-world trip, arrived in China.

“I suggested to the drivers and mechanics that we approach these four, six hour races as one 24-hour event with the chequered flag only falling once we crossed the line without any issues on October 28. This date marks the end of the inaugural FIA World Endurance Championship in motorsport’s modern history.

“After winning every GT title possible, Larbre did not miss the opportunity to write its name in the WEC history books too.

“I was able to convince my drivers and partners to put together a two-car team for the 2012 campaign. Then, bearing in mind the ILMC results we achieved in 2010 and 2011, Corvette Racing prepared us two cars, six engines and two complete sets of spare parts so that we could complete this round-the-world adventure without returning to the workshop.

“Together with my close collaborators I put together a cosmopolitan 15-strong team drawn from France, Austria, Canada, the USA, Switzerland, Japan and Brazil for a mission that has proven 100% reliable and which contributed to a fantastic atmosphere from Sebring in the spring until Shanghai in the autumn.

“The drivers have constantly improved their level of performance and are now feared by all opponents. A third consecutive win at the Le Mans 24 Hours and further successes in Brazil, Japan and China leave marvellous memories engraved in the history of this Larbre family. Discovering the Shanghai circuit and its tricky layout required much thought about car set-up and race strategy. But we were prepared and triumphed there to clinch the title in a brilliant manner, despite the dark shadow of Brazil still keen to discredit us. During this final round our response was clear: race victory and the final points required for the title. I took a lot of pleasure from the moment the result arrived.

“And on December 1 we have a trip planned to see Corvette Racing and Pratt & Miller where we will finalise plans for 2013, a season when Larbre Competition will also celebrate its 25th anniversary. See you soon and thank you to all our fans who have come out to support us at the track and followed our activities through the media.”

The 2013 FIA World Endurance Championship begins with the 6 Hours of Silverstone in Great Britain on April 14.

Tréluyer: His final laps at Shanghai before celebrating the championship

Paolo Ruberti's balance at the end of the 2012 season