Strakka Racing confirmed its status as vice-champions in the FIA Endurance Trophy for Private LMP1 Teams by finishing on the podium in all eight rounds of the FIA World Endurance Championship – the final one being at today’s gruelling 6 Hours of Shanghai. 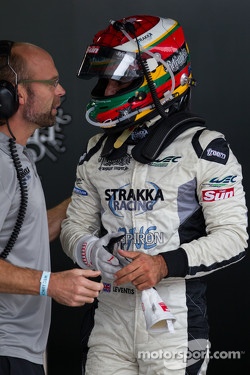 But two collisions, a puncture and three unscheduled pit stops cost it four laps and ruined a carefully planned race strategy – yet true British bulldog fighting spirit and determination saw Strakka finish 3rd, after the leading Privateer #12 Rebellion stopped in the closing stages of the race.

A jet-lagged Jonny made a brilliant start and overtook the #12 Rebellion (Neel Jani) and got alongside the #22 JRM (Karun Chandhok) for the Privateer lead at Turn 1, before Jani overtook them both into Turn 3.

Jonny eventually overtook Chandhok at Turn 14 on lap 11 to move up to 2nd Privateer and 5th overall, and immediately began to pull away.

Having handed over to Danny for a double stint, the #21 Strakka Racing HPD ARX-03a continued to hunt down the #12 Rebellion at a remarkable pace, quickly reducing the deficit from 21 to eight seconds.

The strategy of single stinting the tyre was paying dividends and Strakka Racing was closing in on the Privateer leader when bad luck intervened.

Nick got in for this first of two stints and was pushing hard before he too was hit from behind, this time by a Ferrari, which punted him off at Turn 11.

After a precautionary pit stop he was able to continue, but the combined effect of his and Danny’s misfortunes were that at half distance Strakka Racing had gone from closing in on the Privateer leader (4th overall) to last Privateer and 10th overall.

Jonny pushed hard on his second stint, putting more miles on the tyres than planned in an attempt to make up ground, before handing over to Nick for the final stint.

In fading light, Nick drove faultlessly to make up considerable ground, and when 4th Privateer and 7th overall appeared the most likely outcome, the retirement of the #12 Rebellion five laps from the end promoted Strakka Racing onto the Privateers’ podium and 6th overall.

Nick: “We were unlucky at the beginning of this race with Danny picking up a slow puncture and then being hit by the Audi, which cost us a lap. Jonny and Danny did great first stints, but those unfortunate pit stops put us on the back foot.

I was making up ground and had an incident with a Ferrari GT; it was a fairly major impact, so I did a lap to assess the damage before coming into the pits – and by the time I’d got going again we’d lost almost three laps.

It was just a case of keeping out of trouble and bringing the car home after all of that, which we did. It’s great to finish on the podium once again, but I’m a bit gutted because you could see from the early part of the race what a great pace we had and that we could have challenged for the Privateers’ victory.

All the boys in the team did a fantastic job in Shanghai, as they have done everywhere all year. We’re immensely proud to have finished second in the Privateers’ World Endurance Championship and we really can’t wait to come back next year and try to win the title.

We’ve got a lot of work to do over the winter months with quite a few development parts coming, plus a new tyre, and our work with Strakka Performance, so we all hope to return next year a lot stronger, fitter and much better prepared.”

Danny: “The car had great race pace and it felt really good today. The race was going well until I picked up a slow puncture somehow and then I got hit from behind by the #1 Audi of Marcel Fässler into Turn 12, which damaged the rear bodywork.

He waved apologetically as he went past, but the damage had been done and we had to replace the rear panel at the next pit stop. It was very unfortunate and those unscheduled pit stops put us out of sync strategically, but apart from that it was good fun.

I knew from the practice sessions that the race in Shanghai was always going to be a game of strategy from the pit wall, and so it proved. I’m really pleased that we’ve finished second in the Privateers’ category; I’d have taken that at the beginning of the year.

A lot of hard work has gone in along the way and it’s all down to the engineers, technicians and the guys on the pit wall who made it happen this season. In our first year back in LMP1, it’s great to come away with second place in a world championship.”

Jonny: “I was quite close to getting the Privateer lead at the first corner, as I went around the outside of Neel Jani and alongside Karun Chandhok, but I thought I might get hung out to dry so I pulled in.

Even though we’ve got the same car as JRM, Karun held me up a little bit coming onto the back straight which gave Neel a chance to get a tow from me and overtake, so he was able to get past.

Once I overtook Karun a few laps later I was able to pull away from him quite easily. I handed over to Danny in pretty good shape and he was doing a good job taking the fight to the Rebellion until he got a puncture and then the Audi ran into the back of him as well.

After that, it was an uphill struggle. I thought Nick was outstanding today, and really drove well in both his stints, particularly the last one which gave us the podium finish.

Personally I was pleased. I’ve had jet-lag and haven’t slept well since I arrived in China, but you get used to not much sleep in sportscar racing and the lads in the team joke I drive better when I haven’t slept anyway!

To finish second in the Privateers’ category, having moved back into LMP1 after two years in LMP2, and in a points-system that worked against one-car teams as well, is a great achievement by everyone at Strakka.”

Dan Walmsley, Strakka Racing Team Manager: “It was nice to finish the season with a podium, because we really have to give thanks to everyone in the team who have worked so hard since the car arrived in our workshop in January.

We’ve worked hard to unlock the performance of the car, the performance of the drivers, we’ve established a great reliability record, we can take the fight to the very best privateer teams in LMP1 and we’re hoping to raise that bar next year and try to get in amongst the manufacturers – and we’re very hopeful that the upgrades over the winter will help us bridge that gap.

As a first year back in LMP1, I don’t think we could have asked much more than to finish all eight races on the Privateers’ podium, be the only WEC Privateer team to stand on the overall podium, be in the mix regardless of the track layout and weather conditions and finish second in a world championship.

It’s a very proud moment and we need to review, reflect and build towards an even stronger 2013.”