Two of the OAK Racing Morgan-Nissan LM P2s lock out the second row of the grid for the Spa-Francorchamps 6 Hours!

Tomorrow (Saturday) the No. 24 Morgan-Nissan LM P2 entered by Le Mans-based team, OAK Racing, will share the second row of the grid with its sister car No.35 for the second round of the FIA World Endurance Championship on the Spa-Francorchamps circuit in Belgium.

Olivier Pla and Alex Brundle in No. 24 associated with David Heinemeier Hansson set the third highest average speed in the category in qualifying in the early evening with a time of 2m08.932, closely followed by Bertrand Baguette and Martin Plowman, sharing No. 35 with Ricardo Gonzalez, who clinched fourth spot in 2m09.606. The gentlemen driver line-up in No. 45 lapped in 2m13.518. The session was red-flagged after No. 41 went off stopping some drivers who were on flying laps much to their regret. 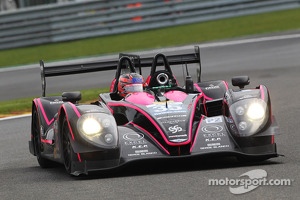 The two free practice sessions took place the same day in reasonably good weather conditions with a dry track in the afternoon. Thus, OAK Racing was able to test on each of its three Morgan–Nissan LM P2s - designed and developed by its manufacturing department, Onroak Automotive - a specific but complementary setup, as the team worked to find the best race trim. Olivier Pla set the fastest time in the morning session and was second-quickest in the afternoon, while Bertrand Baguette finished fifth and fourth. There were no technical problems, which augurs well for the race.

Sébastien Philippe, OAK Racing Team Principal: “It’s a satisfactory result for tomorrow that doesn’t really surprise me when all’s said and done. What does amaze me, though, are the cars on the front row. We were expecting Delta-ADR and we have the Pecom Racing Oreca-Nissan and the Jota Zytek-Nissan. During the race we can rely on the durability and consistency of our Dunlop tyres, and we’ll see if the quickest car whose rubber isn’t supplied by the same manufacturer will enjoy the same longevity. That’s one of tomorrow’s major unknown factors. In any case, with three cars covered by less than 4/10s it looks like we’re in for a hotly-contested race.”

Olivier Pla, No. 24 Morgan-Nissan LM P2: “Unfortunately, we got caught out by the red flag. I went out to do my flying lap and the session was red-flagged at that very moment, which didn’t help me at all in managing and getting the best out of my tyres. I really gave everything I could, and today I couldn’t have gone any quicker. We all did our utmost and our third place on the grid is still pretty satisfying. Tomorrow, our rivals had better watch out!”

Martin Plowman: No. 35 Morgan-Nissan LM P2: “Starting the race from P4 tomorrow isn’t the end of the world even if it isn’t where we wanted to be! We worked very hard to get the right setup on the car and settle the balance problems so that each driver feels at ease in it. Even though it would have been better to have been consistent and quick over two qualifying laps, I think we’re in pretty good shape for tomorrow’s race in which we’ll have to take SpaFrancorchamps’ completely unpredictable weather into account. Overall, we’re feeling confident.”

Jacques Nicolet, owner and driver of the No. 45 Morgan-Nissan LM P2: “I’m pleased because I was quick straight away. I set my first timed lap in 2m12, a second and a half faster than in practice! I improved this to 2m11.4 second time round without taking any risks and the car was a real pleasure to drive. My teammate backed me up well and also improved his lap times. It’s encouraging for the race.”

The start of the race will be given tomorrow, Saturday, at 14h30 (local time).

Audi in grid positions one to three at Spa