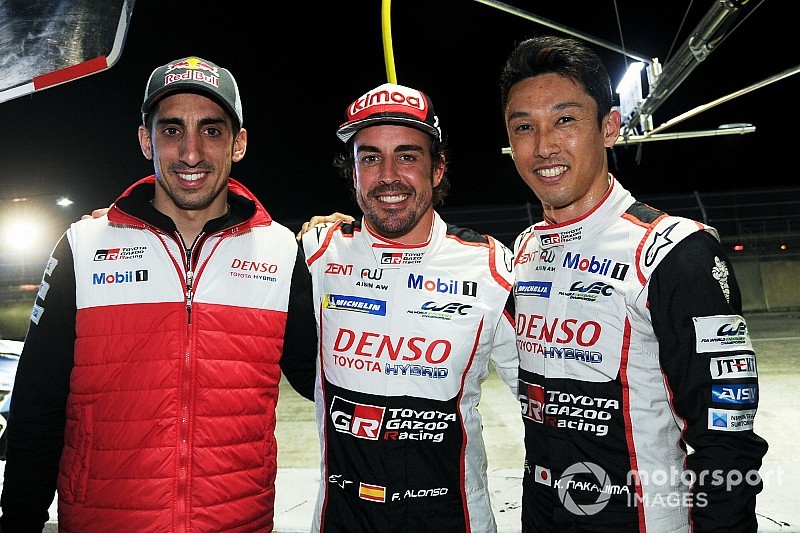 Kazuki Nakajima took over the #8 Toyota to establish a qualifying average of 1m40.318s, a little under half a second up on the sister #7 car shared by Conway and Jose Maria Lopez.

Conway's 1m41.082s left the #7 Toyota nearly a second behind after the first runs before Lopez posted a 1m40.544s right at the end of the session.

The Argentinian had to pull out a quick lap to make it another all-Toyota front row after an off on his previous lap, his time resulting in a 1m40.803s average.

Alonso said: "Definitely it was a nice lap, a nice feeling with the car. There were a couple of tenths here and there, so maybe a 1m39s was possible."

Nakajima added: "Thanks to Fernando's mega lap the only job I had to do was not mess up and put the lap together."

The #17 SMP Racing entry qualified by Stephane Sarrazin and Egor Orudzhev was best of the LMP1 privateers with a 1m42.730s average.

Sarrazin had posted a 1m43.542s to put the BR Engineering BR1 sixth after the first runs, before his teammate's 1m41.919s vaulted the car up to third.

The second of the AER-powered BR1s took fifth with a 1m43.005s average from Mikhail Aleshin and Brendon Hartley, while the #1 Rebellion qualified by Mathias Beche and Neel Jani took sixth position with a 1m43.015s average.

Stephane Richelmi set the fastest P2 lap of the session with 1m46.932s before Gabriel Aubry followed it up with a 1m48.194s.

That gave them a 1m47.558s average, which put them more than half a second up on the 1m48.208s from Will Stevens and David Heinemeier Hansson in the sister car.

Pierre Thiriet and Nicolas Lapierre took third with a 1m48.524s average in the Signatech Alpine Oreca.

Christensen was second after the first runs behind Aston Martin driver Alex Lynn with a 1m57.384s, which Estre followed up on with a 1m57.616s after a short interruption for a red flag.

That gave the #92 factory Porsche 911 RSR a 1m57.500s average, which was just over a tenth up on Ganassi Ford drivers Andy Priaulx and Harry Tincknell.

The second of the Ford GTs took third in the hands of Stefan Mucke and Olivier Pla on 1m57.714s.

The best of the MTEK-run BMW M8s qualified by Augusto Farfus and Antonio Felix da Costa was fourth on a 1m57.841s average.

Antonio Garcia set the fastest GTE Pro time of the session on a 1m57.257s in the solo factory Chevrolet Corvette C7.R - giving the car a 1m57.844s average after Jan Magnussen had been slowest in class after the first runs.

Davide Rigon and Sam Bird were sixth in the best of the AF Corse Ferrari 488 GTEs, while the two Aston Martin Vantage GTEs brought up the rear of the class field.

Technical problems prevented Maxime Martin from setting a quick lap in the car he qualified alongside Lynn, leaving them last in class.

Christian Ried and Matt Campbell took pole in GTE Am in the fastest of the Dempsey-Proton Porsche 911 RSRs.

There was a red flag during the GTE session due to a major crash for Luis Perez Companc in the #61 Clearwater Racing Ferrari at Turn 7. The Argentine driver escaped unharmed.