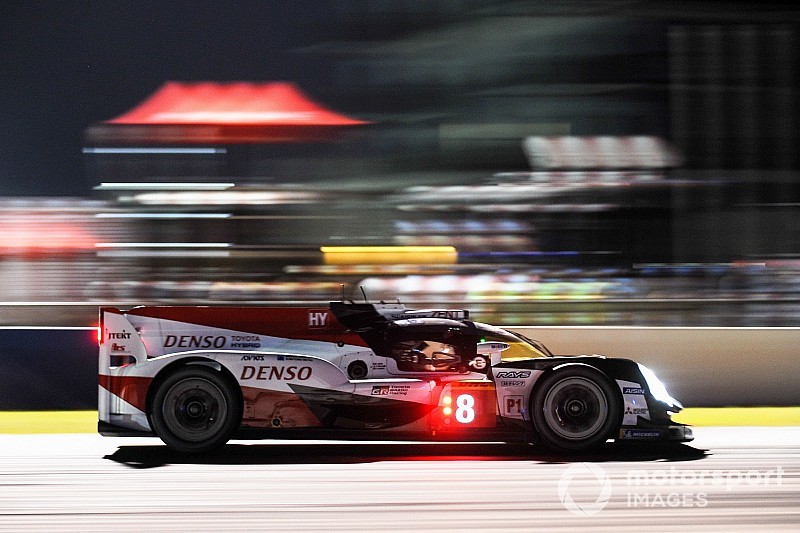 At the four-hour mark, the leading Toyota TS050 Hybrid driven by Kazuki Nakajima had completed 125 of the 268 scheduled laps around the Florida airfield track.

That means the race is unlikely to go its full distance and will instead conclude after eight hours, at midnight local time (4am GMT).

The polesitting #8 Toyota led the opening half of the race virtually throughout, with Sebastien Buemi building up a cushion over teammate Jose Maria Lopez in the early stages.

Two full-course yellow periods - one of which became a full-blown safety car - closed the gap between the pair, with Mike Conway in the #7 closing in on Nakajima after the latter disruption, caused by Pastor Maldonado rear-ending the barriers in the DragonSpeed LMP2 car.

That prompted Fernando Alonso and Kamui Kobayashi to hand over to Nakajima and Conway respectively, and Conway reduced what had been a 14s lead for the #7 down to just 3.5 seconds.

Orudzhev had been pulling away from the #3 Rebellion R-13 at the time of his off at Turn 1, and the Russian's demise meant the car shared by Thomas Laurent, Gustavo Menezes and Nathanael Berthon held third after four hours, albeit four laps off the lead.

The #11 SMP car was delayed by an early puncture, and held fourth in the hands of ex-Formula 1 racer Brendon Hartley, three laps behind Berthon's Rebellion.

LMP2 was led by the #37 Jackie Chan DC Oreca of Jordan King, who held an advantage of more than 30 seconds over Pierre Thiriet in the #36 Signatech Alpine Oreca.

The polesitting #38 DCR machine fell victim to an electrical gremlin that cost the squad some 35 laps during a lengthy stop for repairs.

Ford Chip Ganassi Racing's #67 car led GTE Pro for almost all the first half of the race, and after four hours sat second behind the off-sequence #97 Aston Martin Vantage.

Andy Priaulx had built up a lead of some 20 seconds before the first FCY period, which was then nullified by the safety car, after jumping ahead of his rivals in the first round of stops.

Priaulx was second at the four-hour mark ahead of Darren Turner in the #95 Aston Martin and the two Porsche 911 RSRs of Kevin Estre and Richard Lietz.

Ford's #66 car dropped out of contention early on with an alternator problem.

Aston Martin led GTE Am at half-distance after a collision between the two leading cars in class.

Jorg Bergmeister was leading in the Project 1 Porsche when he was tagged by Giancarlo Fisichella in the Spirit of Race Ferrari, a move which earned the Swiss squad a stop-and-go penalty.

Paul Dalla Lana was 50 seconds ahead of Christian Ried in the best of the Dempsey-Proton Porsches after four hours, with Patrick Lindsey holding third in the Project 1 car.