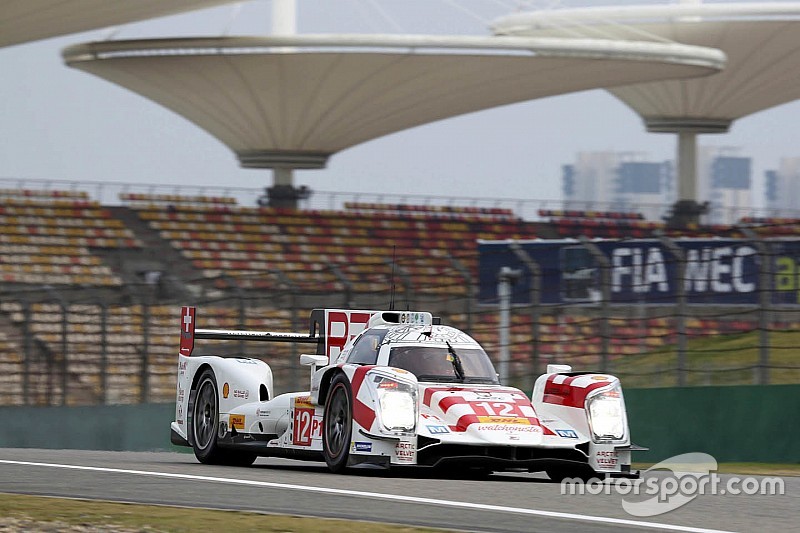 After a race full of drama, Mathias Beche and Nicolas Prost in the #12 Rebellion R-One AER secured their second straight win of the season amongst the LMP1 Privateers at the FIA WEC 6 Hours of Shanghai, finishing in 7th place overall.

With this victory, Rebellion Racing scored enough points to secure a fourth win of the FIA WEC Endurance Trophy for private LMP1 Teams after their previous wins in 2012, 2013 and 2014. The Rebellion Racing team have faced many challenges and hard times this year, but in winning for a fourth time the LMP1 Privateer Trophy on top of their 1-2 at the Le Mans 24 Hours, the Swiss squad have achieved all of their targets for the year and it’s a great reward for the hard work by the team.

The race in Shanghai was a tough one, with the start given under the safety car and the rain changing in intensity for nearly four hours. During the last stages of the race, only the racing line was drying.

The #12 Rebellion R-One AER had an almost trouble free race as Mathias Beche and Nicolas Prost led the race from the early stages through to the chequered flag. In the closing minutes of the race, Mathias crashed at high speed into the barriers, damaging the front and rear ends of the car. He was able to bring the car back to the pits where the #12 crew, assisted by the #13 crew, managed to quickly replace the bodywork.

The race of the #13 Rebellion R-One AER was briefly interrupted early on with an unscheduled pitstop due to an oil pressure alert that dropped the chrome red car down in the standings. Later, during an intense period of rain, Dominik Kraihamer suffered aquaplaning and ended his slide in a gravel bed. He rejoined the race. Later in the race, Alexandre Imperatori had a contact with a GT car and he had to stop for repairs to the car’s bodywork.

In total, the #13 Rebellion R-One AER was 4 laps behind the #12 car with two hours remaining in the race. Mathéo Tuscher completed well his first stints in a FIA WEC race, he was fast and safe on a drying track trying to catch the #4 CLM car. As the 6 hour race neared its conclusion, the #13 Rebellion R-One AER was back within reach of the podium but a mechanical failure two laps before the chequered flag spoiled their efforts.

At the end of a challenging day, the team is pleased with the championship win and the Privateer race win and the fact that from the early free practice sessions to the last stage of the race both the Rebellion R-One AER cars showed strongly, but we also feel sorry for the #13 car crew as their hard work was not rewarded.

The next race for the Rebellion Racing team will be the 6 Hours of Bahrain, the final round of the 2015 FIA World Endurance Championship to be held on November 21st.

Mathias Beche – Rebellion R-One AER #12: "It was a good day for us. We always try to push and extract the best from the car and from ourselves and it’s nice to get the win at the end. It was a tough race, conditions were difficult all the way and we are pleased to be at this position at the end of the weekend. I did a mistake on track and that is not common for me. I was lucky and the boys did an incredible job to send very quickly the car back on track. I want to thank them as well as our engeneering side because if we got the win at the end it’s thanks to them. It’s also a great ending because on top of this we won the LMP1 Privateer Trophy."

Nicolas Prost – Rebellion R-One AER #12: "I am really happy with this second win of the season. We knew that the race could be difficult, and it was, but we managed it well, we had a good strategy making the right calls at the right moment. Our pace in the race was quite good and the car was reliable. I want to thank our mechanics for the fantastic job they did all weekend and our engineers for giving us a good race car. "

Dominik Kraihamer – Rebellion R-One AER #13: "It’s another hard day for car #13 and for me. We had a bad start with an alert with the oil sensor and I had to pit. Later in the race the rain was heavier and I lost the car on aquaplaning and I lost time waiting to be towed out of the gravel bed. I drove more than three hours and it was mentally demanding. A DNF just two laps from the end of the race, loosing a podium finish, is not the result you want to have, when you have put so much of yourself during the race. I deeply hope that next race will be a good one for us, winning at Bahrain would be the best way to end the season. "

Alexandre Imperatori – Rebellion R-One AER #13: "It was a difficult race and we can be disapointed by how the race finished for us, the conditions made the race very tricky from the beginning onwards. We had a good car all weekend, but we didn’t have the clean race we were expecting today. Car #12 deserve their win, we have to improve and make sure that for the next race we will have no mistakes and good reliability with the car."

Mathéo Tuscher – Rebellion R-One AER #13: "I think we did a great job today, we are quite a good team of drivers together. I am pleased because I am feeling better and better in the car. I hope that at Bahrain we will have a better race and maybe a win. I am disapointed by the ending of the race, but I want to keep the good performance we had all weekend. I am very happy to have joined Rebellion Racing for the last two races of the FIA WEC and I am focused on performing well in Bahrain."

Bart Hayden - Rebellion Racing Team manager: "It’s a day of mixed emotions for us. On the one hand, we are absolutely delighted to have won the FIA Endurance Trophy For Private LMP1 Teams, the fourth year in a row that we have done that. On the other side, we’ve had a DNF with the other car just two laps from the end of the race. But, if we focus on the positives, there are many good things that we can take away from the weekend. We’ve achieved significant mileage across both cars during the weekend and shown good pace in the wet and the dry conditions.

Mathéo Tuscher made a very commendable debut in sportscars and as the youngest LMP1 driver in the history of the WEC he achieved a personal milestone too. Special thanks needs to go to the mechanics on both cars who prepared the cars well and in the race they effected the bodywork repairs that were needed in very quick order after the couple of collisions that we had. We’ve got one race left this season and we will be going to Bahrain trying to secure second place in the Private LMP1 Teams championship too."