Nick Heidfeld and Neel Jani qualified their Lola-Toyota #12 in sixth place for the start of the 6 Hours of Spa and claimed the first place of the LMP1 Privateer entrants with a fastest average laptime for the two drivers of 2:01.482. 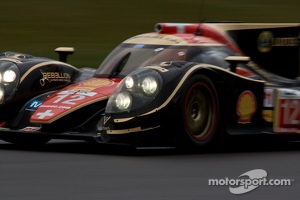 Andrea Belicchi and Mathias Beche, behind the wheel of the #13 Lola-Toyota recorded a fastest average laptime of 2:03.278, putting their car in seventh position for tomorrow’s start.

The drivers of both cars, with Nick Heidfeld, Nicolas Prost and Neel Jani in car 12 and Andrea Belicchi, Mathias Beche and CongFu Cheng in car 13, will be pushing to increase the team's lead in the FIA Endurance Trophy for LMP1 Teams. The start of the 6 Hours of Spa will take place at 14:30 local time on Saturday may 4th, 2013.

Neel Jani – Lola-Toyota #12: “We are happy with our result of today. We are the best privateer on the grid and that was what we were targeting. More would only have been a bonus. For the race, we are close enough to the factory cars to benefit from the situation if something should happen with them. ”

Nick Heidfeld – Lola-Toyota #12: “ It has been a very good day for us. We toped our class in each of the 3 sessions of the day. We were very close in the practice sessions to the factory cars. I'm sure that I would have improved my best laptime if I hadn't been slowed by an LMP2 car on my last flying lap, but I'm happy with the position we are today. We are developing the car and we are getting the harvest from our efforts. ”

Andrea Belicchi – Lola-Toyota #13: “The format of the day at Spa, 2 free practice sessions and the qualifying in a single day, was a first for everybody . It's a special exercice because you haven't very much time to find the right set-up to be competitive for the qualifying session. We did improve the car during the two free practice sessions but not enough compared to our teammates in the #12 who are far ahead. ”

Mathias Beche – Lola-Toyota #13: “It was the first time for me that I drove in real qualifying spec with a new set of tyres and with low fuel. And I had only 2 laps to be on the pace. Unfortunately, I was blocked by trafic.

We are glad to be ahead of the HPD. Regarding the championship, it will be a good result if we can keep this position after the end of the race. But I can't be satisfied with my performance compared to the laptime of the #12 drivers. I feel that we are not at our good place yet, we have some work to do.”

Bart Hayden REBELLION Team Manager: “Once again, I am very pleased to have secured the best two privateer places on the grid. Really, that has to be our minimum aim in this WEC Championship. The new « all practice sessions in a single day » format here at the 6 hours of Spa has been a bit up and down for us.

Our #12 car has been very close to the factory cars during the two free practice sessions, but our two cars couldn't quite play in the same game during the qualifying session.

Having said that, the conclusions of this day are good for us: we have demonstrated today a massive step forward with our cars and we feel good about that especially when we look at all the effort that has gone in and when we know that the biggest event of the season, the 24 Hours of Le Mans, is just around the corner.

Before then however, we have tomorrow's race to focus on and we're very much looking forward to it."

Frustration at Francorchamps for Toyota Racing

Aston Martin qualifies on pole in both GTE classes at Spa