The lap time of 1:46.728 gave 5th place for Saturday's race for REBELLION Racing

Nicolas Prost and Mathias Beche secured the fifth fastest average laptime of 1:46.728 during the qualifying session for Saturday’s 6 Hours of Bahrain, placing the #12 Lola-Toyota on the third row of the grid. This result in the qualifying session allows the team to record an additional «pole position» in the FIA Endurance LMP1 Team Trophy, the eighth in eight races this year.

The Swiss team will be aiming for a podium result at the end of the last race of the 2013 FIA World Endurance championship that will also be the final race for the Lola Coupé LM P1. 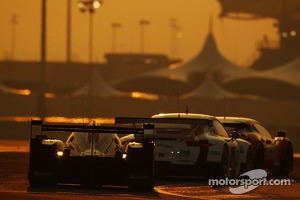 Nicolas Prost : « I made two good laps in quali, without competition it's hard to push at the maximum, but I am quite pleased with my lap times. It was good for me to do the qualifying as I didn't have many chances to do that recently. The cooler weather compared to last year will be helpful for the race. I hope we can secure a good result for the last race of the Lola Coupé. »

Mathias Beche : « I was a bit unlucky with traffic but anyway couldn't get much more out of the car. I'm pleased to experience a new track for me and to get some more experience with the team. Again there is a big gap with the factory cars, I'm really hoping that the 2014 regulations will make this gap closer in the future.»

Bart Hayden – REBELLION Racing Team Manager : « Nico and Mathias did a good job in qualifying, but the pace of the factory cars was too much for us today. We are focused on producing the best result for the last race of the Lola Coupé … but to be honest our minds are largely engaged into the R-One programme and the 2014 season.»