REBELLION Racing claimed first and second places once again in the FIA Endurance LMP1 Team Trophy at the 6 Hours of Spa, second round of the 2013 FIA World Endurance Championship. 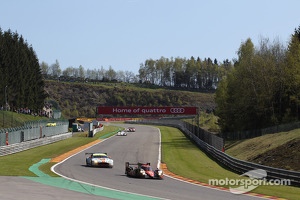 The two Lola-Toyotas had swapped the lead with each other each other in the LMP1 Trophy throughout the race as they ran with different race strategies. The #12 team opted for a double stints strategy for all of its three drivers, Nick Heidfeld, Nicolas Prost and Neel Jani. The #13 team chose a mixed race strategy with a triple stint for Andrea Belicchi who started the race and double stints for the two other drivers, CongFu Cheng and Mathias Beche who drove to the chequered flag.

After two hours in the race, the Strakka Racing HPD-Honda #21 was down one lap to the two REBELLION Racing’s cars and unable to follow the pace of the two Toyota powered Lolas.

The Strakka car was slowed when an LMP2 car crashed into its back and forced it to pit for repairs. Continuing their pace to the finish line, both REBELLION Racing’s cars took the chequered flag.

For the second round of the 2013 FIA WEC, both Lola-Toyotas demonstrated great reliability and it was another nearly trouble free race for the #12 and # 13 REBELLION Racing cars. This win at the 6 Hours of Spa allows REBELLION Racing to score maximum points and to increase its lead in the FIA Endurance LMP1 Team Trophy.

Neel Jani – Lola-Toyota #12: “Our main objective from the race is achieved. We are 5th and 6th and have diplaced one factory Toyota behind us. I hoped to fight with more competition from the LMP1 private teams but there you have it. On the other hand, we have closed some of the gap we had with the factory cars at Silverstone. So it has been a good weekend for us. Our podium is a good reward for all the team. We are now ready for Le Mans.”

Nicolas Prost – Lola-Toyota #12: “The gap with the factory cars is difficult to close but we are managing every race to complete it. So, this podium is very satisfaying for us even if it's not as satisfying as an overall one.”

Nick Heidfeld – Lola-Toyota #12: "It was not really easy for us at the beginning of the race compared to yesterday’s practice sessions. The car was harder to drive and the factory cars had improved a lot and made a big gap. I did my best trying to drive pretty safely and saving fuel. Neel and Nico did a good job after me and the race was trouble free for us."

Andrea Belicchi – Lola-Toyota #13: « I am really delighted with the result of our car #13. Finishing with only 26 seconds behind our teammates in the #12, who could have said that yesterday ? The team improved a lot the car before the start of the race. We did a perfect job with set-up, race strategy and driving. It's very encouraging before Le Mans. »

CungFu Cheng – Lola-Toyota#13: "Honestly we are happy to be closer to our sister car #12 than we were at Silverstone ! The improvement is good. We are confident for the races to come. It's a good preparation for Le Mans."

Mathias Beche – Lola-Toyota #13: "I think that we have done a good race. Our driver trio is improving. Congratulations to the engineers for the race strategy which helped us to save a pit stop. I had to deal with hot engine temperature during my second stint so I had to be carefull. So I couldn't drive to battle with #12 for the first place of FIA Endurance LMP1 Team podium. Our first target which was to finish the race is complete. We have now to keep this pace for Le Mans."

Bart Hayden REBELLION Team Manager: “We’ve had another great weekend, our cars showed real pace and got everybody talking about us, which is nice. Congratulations to the drivers for driving quickly and keeping out of trouble. The crews on both cars did good pit-stops, and some good strategy calls by the engineers made it a close race between our two cars all afternoon.

We will be aiming to take this momentum forward with us to Le Mans, but before then, we will be in Laguna Seca with our ALMS car where we will be targetting the overall win."

A second podium finish for OAK Racing in Spa