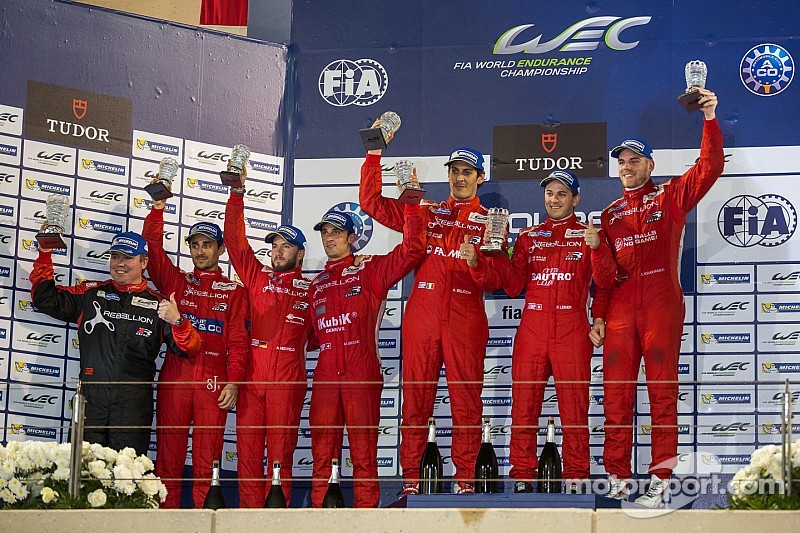 It's the third 1-2 in a row for the Swiss team in three races following their successes in Fuji and Shanghai.

Today, at the 6 Hours of Bahrain, Rebellion Racing achieved a seventh LMP1-L win in seven races since the beginning of the 2014 FIA World Endurance Championship season.

Both Rebellion R-One Toyota cars, #13 and #12 received the chequered flag in sixth and seventh places overall, first and second in the LMP1-L class.

The early stages of the race saw a close battle between car #12 and #13. After the two hour mark, the gap between Mathias Beche and Dominik Kraihamer was only 38 seconds with #12 in sixth place overall and #13 in seventh. The third hour of the race saw an intense battle between Nicolas Prost and Fabio Leimer with both of them responding to the other by improving their fastest laptimes.

I'm sorry for car #12 today who really deserved the win, but at the end, we were the lucky ones which is cool!

In the second part of the race Nick Heidfeld in car #12 was able to increase the lead over Andrea Belicchi taking advantage of #12’s setup in the cooler temperature of the night. For the final stints, Mathias Beche and Dominik Kraihamer were back in the cars.

The Rebellion R-One Toyota #12 was heading for a fifth class win, after a trouble free race when unfortunately, 14 minutes before the end of the race, the car was forced to stop in its pit due to the failure of the alternator belt. The car was pulled back into the garage to check for damage and replace the battery. Staying for 12 minutes in the pit, the #12 car relinquished its lead and the win to the sister car. Andrea Bellicchi, Dominik Kraihamer and Fabio Leimer took the chequered flag in sixth place overall, 6 laps ahead of car #12 in seventh place.

Aside from this issue in the last minutes of the race, the team is very happy with their race weekend. Improvements made with the cars during the weekend are significant and the pace compared to the hybrid factory cars was closer than in the recent races.

The satisfaction at Rebellion Racing is complete as Andrea Bellicchi, Dominik Kraihamer and Fabio Leimer have secured second place in the LMP1-L drivers classification. With their second win of the season, and only one race remaining, they cannot be overtaken by the Lotus-CLM drivers.

With Nick Heidfeld, Nicolas Prost and Mathias Beche winners of the drivers championship, and the Rebellion Racing team crowned winners of the LMP1-L Trophy after their titles in 2012 and 2013, the 2014 FIA WEC season is a « full house » for the team.

Rebellion Racing is looking forward to the 6 Hours of Sao Paulo, the closing race of the 2014 FIA World Endurance Championship, to end the season on another high.

Mathias Beche – Rebellion R-One Toyota #12: " I'm really sorry for the team that we had the alternator belt failure in our car in the closing minutes of the race because I think it was our best weekend so far with the R-One car and with the team in terms of performance. We were at the limit, saving fuel and doing great pitstops. The car was just amazing to drive. We’ve made a big improvement, which is really nice.

I'd like to congratulate and thank the mechanics and James our engineer who did a good job. The final result eluded us today, but that's racing. This time, it was our sister car that had a trouble free race and went on to win."

Nicolas Prost – Rebellion R-One Toyota #12: " Obviously, we are disappointed that the win slipped out of our hands in the final minutes because we had driven a really good race. I think it was one of the best races we've ever had with Rebellion. Our pace was very very encouraging today compared to the works cars and we had nearly a trouble free race. All the drivers were very quick, so it's a bit disappointing not to get the result.

On the other hand, you have to look to the positive which is that we were really fast and we are really making some big progress. I think as a team on our car with Nick and Mathias and our engineers we did a really good job this weekend. We are very happy with how we are getting the potential from the car. Hopefully, in Sao Paulo, we can be even closer to the factory cars."

Nick Heidfeld – Rebellion R-One Toyota #12: " It's not nice not to win the race if you have such strong weekend. The team, the drivers, the engineers worked together very well again. We gained a lap on our sister car which they probably don't like to hear or read! I think it just shows that we did a very good job even if we were unlucky on the technical side. Still, the mechanics did a good job to bring our car out again so that we could finish the race. Concerning my stint, I was quite happy especially with saving fuel. Like in the last race, I learnt quite a bit on how to handle the car."

Dominik Kraihamer – Rebellion R-One Toyota #13: " I had a very good start at the beginning. It was, I guess, my best start ever in all my career. I was spot on. So I was happy and I knew that the #12 car would be very fast. So I just stayed behind and then it slowly pulled away. Then I just continued and concentrated on my race. The car handling was not so easy. Race by race we gain more experience and we will find ways to improve.

I'm really happy for the guys and the team for having a one - two finish again. Now it's on us, drivers, to get the best from the car. I'm sorry for car #12 today who really deserved the win, but at the end, we were the lucky ones which is cool! We’ve had a lot of bad luck during the season until now. It's a good feeling to be up there on the top step of the podium. We are looking forward to the next race in Sao Paulo, for sure ! "

Andrea Belicchi – Rebellion R-One Toyota #13: " First of all, we are happy again with another race without trouble. All the pit stops were just perfect. However, as a car crew, we can’t be one hundred percent happy because it's clear that we are slower that the #12 and this time it was by some margin. We have to look into the data to understand why it is like that and learn and work harder to close the gap and to have more fun. Now the last race in Brazil is coming, we will analyse the data and try to improve. But it's good to finish the race without any problems, that at least is what we have to continue to do."

Fabio Leimer – Rebellion R-One Toyota #13: " It was a hard race today. We were struggling a little bit with the car. It was hard to drive over 6 hours. At the end, we finished first, but we didn't really expect that because we were already one lap behind our sister car before they had their problem, but that's racing. In the first four races for us this year we had some very bad luck, but today the luck was with us. The championship is already won and for us there is no real change. So we will take the victory and we will improve for Sao Paulo so that we can beat car #12 without problems."

Bart Hayden – Rebellion Racing Team Manager: " We are very happy to see both cars get to the end of the 6 hour race with an almost trouble-free run. It’s been an enjoyable week because we’ve taken the momentum that we started to pick up in the previous races and carried it forward here. The factory cars had trouble through the week, so it shows that it’s a tough track, but we made it and another 1-2 finish for the team is great to see.

As well as winning the Privateer’s championship, today’s result has secured second place for us too, so it’s a nice feeling. The early part of the season was tough on everyone as we built and ran the new cars for the first time, but hard work and determination is now showing results and that’s great for team morale. We’ve done a great job here in Bahrain and we will be aiming for the same or better at the final round in Brazil in a couple of weeks’ time."