For this first round of the FIA WEC, both Lola-Toyota demonstrated an extreme reliability.

The Lola-Toyota coupé #12 driven by Neel Jani, Nicolas Prost and Nick Heidfeld took the chequered flag in first position of the LMP1 Privateer entrants (5th overall) in the 6 hour British endurance race after dominating since the free practice and qualifying sessions. 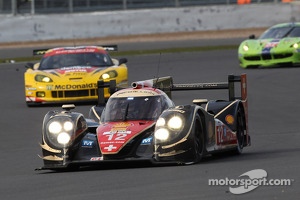 The Strakka HPD challenge disappeared early in the race after the #21 car slid wide and crashed with a GT Ferrari at the end of the second hour of the race.

The challenger to the Swiss team were not able to start again and were forced to retire. From that moment, both REBELLION Racing’s cars were in a good position to control the race.

They maintained a strong pace with safe driving in traffic and no mechanical issues, race facts or weather effects could shake the plans of the Swiss team.

For this first round of the FIA WEC, both Lola-Toyota demonstrated an extreme reliability and it was a nearly trouble free race for the #12 and # 13 REBELLION Racing cars.

This win at the 6 Hours of Silverstone is a very positive result for REBELLION Racing who scored maximum points and is at the head of the FIA Endurance LMP1 Team Trophy.

Neel Jani – Lola-Toyota #12: “We delivered our maximum today. My start was not so bad. I had a good battle with Audi #1 during several laps. The track was very green and it surprised everybody.

My tyres suffered after fifteen laps because of this and I had to stop early. I lost a lot of time until I changed my four tyres. Except this, I took a triple stint without any problem. We score today all the points we could expect for the Trophy. So it's a good race ending for us.”

Nicolas Prost – Lola – Toyota #12: “Most of the race had consisted of chasing our teammates in the #13 which is not a bad thing. I took the wheel after Neel with a comfortable gap ahead of the #13 and #21 and I increased again this gap during my stint. I started under the rain and had to deal with a drying track.

I brought the car safely in for Nick after my double stint with three laps ahead of the #13. We have taken maximum points for the FIA Endurance Trophy so it's a strong result for the team.

After the improvements made on the cars, we are closer than we thought to the factory cars but not enough to fight wheel to wheel with them. We have still to work hard to improve the cars to know how close we can get to them.”

Nick Heidfeld – Lola-Toyota #12: “If this race was trouble free for us, it's a pity that the Strakka HDP was so unlucky today. The race is more fun when you have to fight with other guys ! Concerning my own driving, racing in endurance is really enjoyable. I'm still learning to improve my driving through traffic and I feel better and better.”

Andrea Belicchi – Lola- Toyota #13: “We made a strong race until a GT touched and damaged the rear left of the car. We lost time in the pits when we had to change it.

Otherwise, we would have been wheel to wheel with our sister car #12. We are really satisfied with the improvements on the car. We gain a lot in terms of performance to compete more closely with the factory cars. It's good for the rest of the season.”

CongFu Cheng – Lola Toyota #13: “Because of the changing weather, this week-end at Silverstone was very challenging. I'm really happy with the performance of the car. I feel more and more confident in driving it.

Spending time with the team allows us to know each other better and to develop team spirit. It's good and I can't wait to be in Spa for the next round of the FIA WEC.”

Mathias Beche – Lola – Toyota #13: “This race was our first race of the FIA WEC. Unfortunately, a contact with a Ferrari cost us a lot. We had a good pace. Step by step, I'm discovering the potential of improvement of the car in more “regular conditions” than at Sebring.

Driving an LMP1 is still very fun for me. I think that we can be proud of our result today. I'd like to congratulate my teammates of the #12 for their first place in the FIA Endurance LMP1 Team Trophy. See you in Spa for the next round !”

Bart Hayden REBELLION Team Manager: “It’s satisfying to get a reward for hard work and the results today are a just reward for the incredible efforts of all the team over the winter months.

Credit should also go to the people at Multimatic who have helped us to bring the aero update to the cars for this weekend. We are leading the Championship, but there are many races still to come, so we’ll keep pushing and looking for continued success in the next events. Congratulations to the whole team and we’re looking forward to Spa.”

Silverstone turns it on for Martin