Defending ELMS champs move to the WEC this year.

Ram Racing, European Le Mans Series 2013 LMGTE Team Champion, has been given the green light by the Fédération Internationale de l’Automobile (FIA) and the Automobile Club de l’Ouest (ACO) for what is going to be the young team’s toughest challenge yet: an entry in the 2014 FIA World Endurance Championship which includes as one of its eight rounds the prestigious 24 Hours of Le Mans. 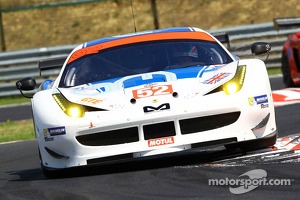 The announcement in Paris today (Thursday, 13 February) of the full-season entry list sees the inclusion of the British-based GT team in both the LMGTE Pro and Am classes, with one Ferrari 458 Italia entered in each of the two categories.

Irish driver Matt Griffin, who steered a Ram Racing Ferrari to three victories in the five-round ELMS series last year and who was crowned LMGTE Driver Champion together with Johnny Mowlem, will be one of two Pro drivers in the largely manufacturer-led class, and his partner in the No.52 F458 will be announced once contracts are finalised in the very near future.

In Am, the hugely experienced Mowlem will headline the No.53 entry alongside another equally experienced fellow British driver, Ben Collins. South African-born businessman Mark Patterson will complete the line up at Silverstone, Le Mans, COTA and Sao Paulo, and his replacement for the remaining four rounds will also be announced in the near future.

For a team which was only launched 14 months ago, and which has – albeit very successfully – completed just one full season of racing, the challenge of stepping up to the world stage is going to be considerable. However, as Team Principal Dan Shufflebottom points out, Ram Racing has met and conquered all the challenges in its path to date and the whole team is ready to face this one too.

“Right from the outset we targeted the FIA WEC as the championship we’d like to be in, and we’re proud and very pleased to have had our entries accepted for 2014,” says Dan. “We’re confident we’ll have an excellent driver line up in both classes which will be able to take the fight to the manufacturer entries. We are under no illusions as to the level which will be required of all of us, but we wouldn’t be doing it if we didn’t think we could meet that high standard.”

“We also know it’s going to be a huge challenge, and we’re more than ready for it. With many of us having previously worked at the tracks we are due to visit there’s some familiarity to help us, but in areas such as the logistics it’s a big step into the unknown. You obviously want to get it right first time and make sure you don’t squander budget by sending unnecessary items in the freight for the fly-aways. We are approaching it carefully and methodically and hope we don’t make any rookie errors!”

The FIA WEC begins on 20th April at Ram Racing’s home track of Silverstone in the UK then travels to Belgium, France (Le Mans), USA, Japan, China, Bahrain and Brazil.

31 entries announced for the 2014 season