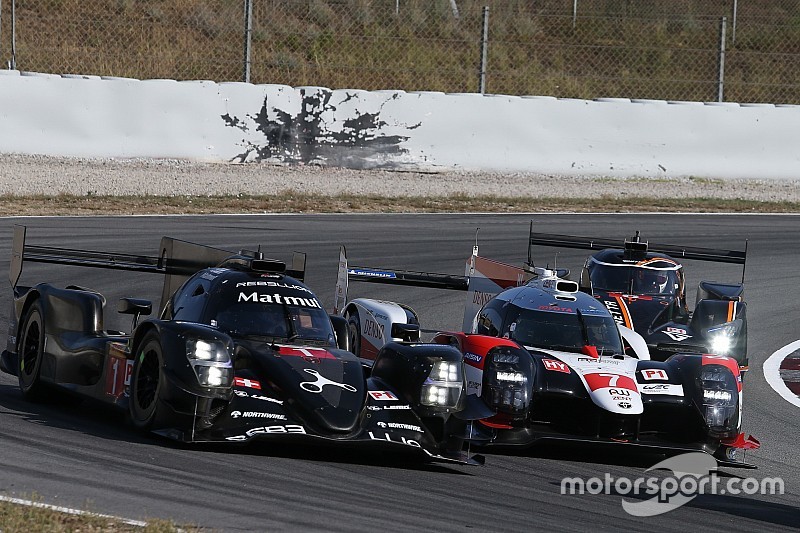 Toyota concluded the opening day of the FIA World Endurance Championship's Prologue test at Barcelona fastest but with a reduced advantage over the quickest of the LMP1 privateers.

Kazuki Nakajima set the fastest time in the #8 Toyota TS050 Hybrid during an evening session that was delayed by an hour due to a red flag and then extended by 30 minutes.

Prior to that interruption, which was caused by problems with the kerbs at Turn 5, Jose Maria Lopez had been quickest in the #7 Toyota that had topped the first session on a 1m31.229s.

That was surpassed by Toyota newcomer Brendon Hartley after the red flag, the Kiwi posting a best time of 1m30.669s in the #8 car, before Nakajima improved to a 1m30.114s in the penultimate hour, marginally slower than the best time set by Lopez earlier in the day.

Kobayashi ended up with the quickest time in the #7 car, just 0.066s slower than Nakajima.

The lead Rebellion ended up within a second of the pace of Toyota, whose advantage over the best non-hybrid car was reduced to 0.959s, down from 1.6s earlier in the day.

Norman Nato was the Swiss squad's fastest driver in the #1 R-13 with a 1m31.073s, a little over three tenths up on Gustavo Menezes in the sister #3 entry.

Ginetta had briefly moved ahead of Rebellion into third, but Mathias Beche's time of 1m31.043s was disallowed because it was set while yellow flags were out.

Beche's previous time of 1m31.818s in the #5 G60-LT-P1s was enough for fifth, 0.003s ahead of the sister car of Mike Simpson. Both Ginettas completed a combined 84 laps, making up for their earlier lack of mileage.

United Autosports maintained its advantage in LMP2, with ex-Formula 1 racer Paul di Resta again setting the #22 Oreca's best time of 1m33.110s - two tenths faster than he managed in the morning.

Toyota reserve driver Thomas Laurent was second-fastest in the #36 Signatech Alpine Oreca, some three tenths behind, ahead of the #37 Jackie Chan DC Racing Oreca of Gabriel Aubry.

Michael Christensen set the German marque's best time of 1m43.903s in the #92 car, while Gianmaria Bruni was a little under two tenths slower in the #91.

Aston Martin's sole GTE Pro car, which is being shared by all four of its drivers, was fifth and slowest in class, behind the top four GTE Am runners.

Project 1 again headed the times in that class, its two previous-generation Porsches split by 0.032s, with Matteo Cairoli's 1m44.843s in the #57 car edging out Jorg Bergmeister in the #56.