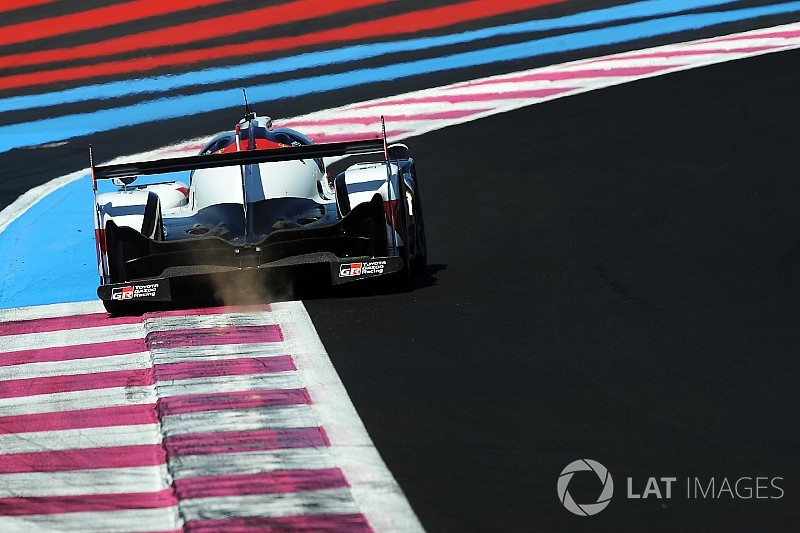 Toyota concluded the first daytime session at the FIA World Endurance Championship Prologue test with an advantage of over five seconds over the best of the LMP1 privateers.

After taking over the high-downforce spec #8 Toyota TS050 Hybrid, Mike Conway posted the quickest time of the day, a 1m32.662s, in the penultimate hour of Friday's opening session at Paul Ricard.

That was 1.993s faster than the Le Mans-spec #7 car, whose best time was set by reserve driver Anthony Davidson, and 5.466s up on the quickest of the LMP1 privateers, the #11 SMP Racing BR1-AER.

The Dallara-built BR1s held a one-two among the privateer contingent, with Matevos Isaakyan ending up 0.058s shy of squadmate Mikhail Aleshin at the wheel of the sister #17 car.

Rebellion's sole R-13-Gibson was fifth fastest, with Andre Lotterer at the wheel, three tenths behind the SMP cars, while Ben Hanley was sixth in the DragonSpeed-run BR1-Gibson.

New Manor signing Alex Brundle was seventh in the only Mecachrome-powered Ginetta G60-LT-P1 to run during the daytime session, ahead of Oliver Webb in the ByKolles ENSO CLM P1/01-Nissan.

Ex-Formula 1 driver Pastor Maldonado led the way in the LMP2 class at the wheel of the DragonSpeed Oreca 07 with a best time of 1m40.771s.

Porsche maintained its advantage in the GTE Pro class, as Richard Lietz improved to a best time of 1m51.650s in the afternoon.

That was enough to beat the best of the Ganassi-run Ford GTs, the #67 of Harry Tincknell, by 0.360s.

Olivier Pla was third-fastest in the #66 Ford, ahead of the second Porsche and the best of the AF Corse-run Ferrari 488s.

Aston Martin could manage no better than sixth with the quicker of its two new Vantage GTEs, while the best of the two BMW M8s was eighth fastest behind the second Ferrari.

Porsche young professional Matt Campbell set the pace in the GTE Am class with a best time of 1m53.515s in the #77 Dempsey-Proton 911 RSR.

The #5 Ginetta and the #10 DragonSpeed cars have been added to the previously-announced list of 13 cars that will take advantage of the 30-hour test and run continuously through the night.

For the remaining competitors, action resumes at 0900 on Saturday morning and concludes at 1600.