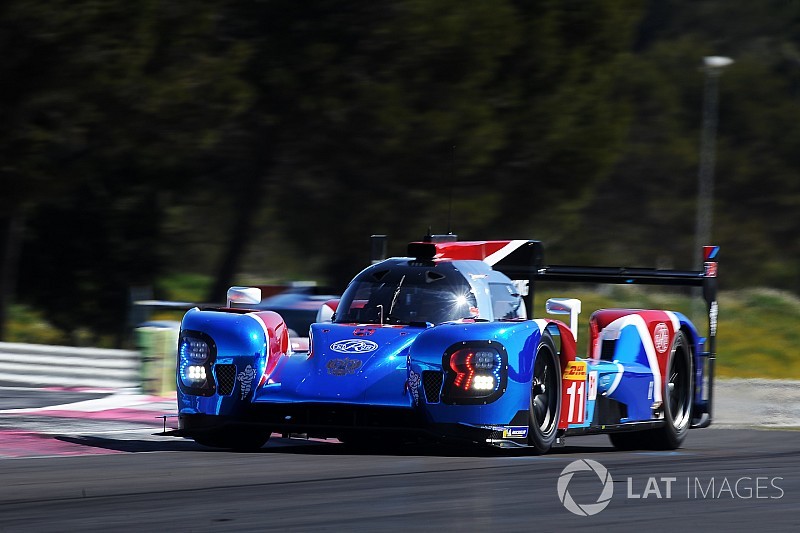 The LMP1 privateers have closed the gap to Toyota over the course of the night session at the FIA World Endurance Championship Prologue test at Paul Ricard.

SMP Racing's AER-powered BR1 filled third spot beyond the two Toyota TS050 Hybrids at the end of the the night session, in which 15 of the 35 cars present at the French Grand Prix venue took part.

Ex-Formula 1 driver Vitaly Petrov posted a 1m37.034s around 11pm to close to within almost four seconds of the best Toyota time.

His time compared with the test best so far, a 1m32.662s set by Toyota driver Mike Conway on Friday afternoon.

The high-downforce TS050 did not run during the night, while the Le Mans-trim car did not improve on the 1m34.655s set by Anthony Davidson on Friday afternoon.

Rebellion's new Gibson-powered R-13 was fourth in the times at the end of the night session at 9am with a 1m37.044s set by Andre Lotterer on Friday evening.

New SMP driver Stephane Sarrazin improved the time of the second of the BR1s, setting 1m37.574s shortly before midnight.

The ByKolles team's ENSO CLM-Nissan P1/01 ended up sixth with a 1m37.795s from Tom Dillmann, which briefly leapfrogged the Frenchman to third in the times at around 9:30pm.

The second of the Manor Ginetta-Mecachrome G60-LT-P1s, which was completed in the pits at Ricard, made it onto the track for the first time during the night.

Manor's two cars ended up at the back of the P1 field behind DragonSpeed's Gibson-engined BR1.

Both factory Porsche 911 RSRs improved during the night session to take one-two in GTE Pro.

Gianmaria Bruni ended up fastest with a 1m51.332s posted shortly before the 9pm cut-off at which the rest of the field could rejoin the test.

The Italian's time put him half a second up on Kevin Estre's 1m51.837s best in the sister car.

The two Ganassi Ford GTs, which did not run at night, filled out third and fourth positions with the times set by Harry Tincknell and Olivier Pla on Friday afternoon.

Matt Campbell's mark from the end of Friday's day session in the best of the Dempsey-Proton Porsches stood as the best GTE Am time, while none of the seven LMP2 cars took part in the night test.