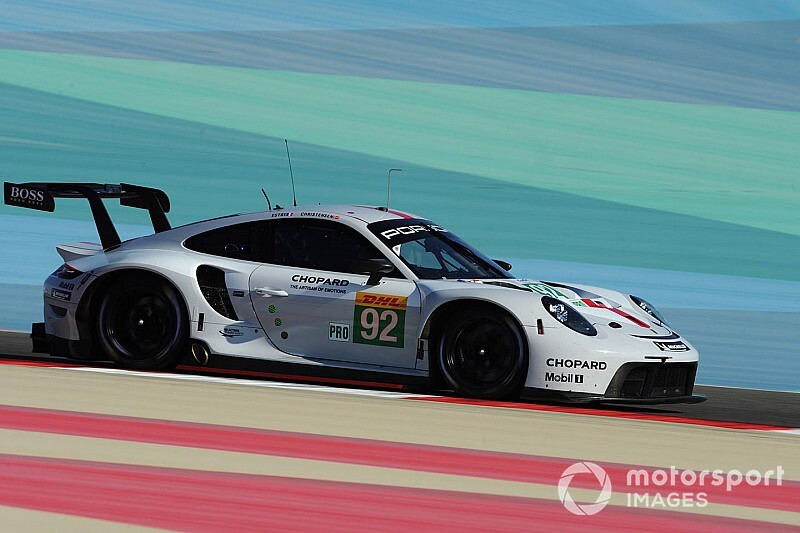 Porsche had emerged as the favourite for victory in the 8 Hours of Bahrain after it locked out the front row of the grid, the #91 911 RSR-19 of Gianmaria Bruni and Richard Lietz claiming pole from the sister #92 machine of Estre and Michael Christensen.

Both cars were in contention for victory when they ran into unrelated technical issues in quick succession in the fourth hour, and had to settle for fifth and sixth in the final classifications after losing several laps in the pits.

Estre and Christensen’s Porsche suffered a damper failure, while a wheelnut on Bruni and Lietz’s car came loose and caused tyre damage.

Estre said the pace Porsche had showed all weekend at the Sakhir circuit made the result all the more disappointing.

“We definitely had the car to win this race or to fight for the victory,” Estre told Motorsport.com.

“In my stint everything was going well. I passed the Aston, I passed the Ferrari. Then we had a comfortable gap, we had a good strategy until the end.

“But we had an issue on the rear left damper that is first time for us but this happens. And then we had to spend I don’t know three or four laps in the pits and we lost some time.

“Then we tried to recover but to finish sixth in Pro but unfortunately seventh in GTE because one Am [the class-winning Project 1 Porsche] was in front of us so we lost quite a lot of points.

“We are just down especially this race when you feel that you can win the race and you finish last and second last, it feels really bad.

“But in the end we know that this championship you have to be consistent, you have to score points all the time. We get double points at Le Mans, that’s going to be for sure ending in Le Mans. so we have to be there until the end.”

The bonus points offered by the returning Bahrain round allowed Aston Martin to overthrow Porsche from the top of the manufacturers’ standings after the #95 Vantage of Marco Sorensen and Nicki Thiim claimed first, and the sister #97 machine driven by Maxime Martin and Alex Lynn also finished on the podium in third.

Asked if the race was a big loss for Porsche from the championship standpoint, Estre said. “Yeah, for manufacturers, for drivers, for both. It was the biggest points this [calendar] year.

“There will be again this amount of points in Sebring and again more in Le Mans so for sure nothing lost. I didn’t see the championship but it’s for sure now very close. But definitely some issue on our car, some issue on the #91.

“Probably lost a lot of points which is a shame because we had the pace and the performance to win this race.”

Porsche’s Head of Operations for WEC Alexander Stehlig described the issues the German manufacturer faced in Bahrain as “minor defects”, but admitted that they had huge consequences in one of the only three races on the calendar that offers extra points.

“What a huge disappointment,” he admitted. “We only achieved fifth and sixth at the longest and most important race of the first half of the season.

“The fact that a lot of points were awarded at this round makes it even worse. We had minor defects on both cars, which we’ll now take a good look at. We didn’t think the last outing of the year would turn out like this.”

Why the WEC's wait for a real victory fight goes on