The cover is off the 919 Hybrid, and its ready to hit the track.

The Porsche 919 Hybrid has officially been unveiled at the Geneva Auto Show March 4, with the exact livery that was leaked yesterday adorning the machine.

Timo Bernhard and Mark Webber did the honor of pulling the cover off the car at the Auto Show.

“We started the program in 2011 with a completely white piece of paper,” said Bernhard.

“I know how important it is for Porsche and all the fans to return to Le Mans…after 16 years we are going to return,” Webber said. 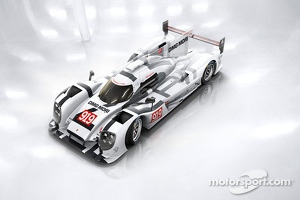 The 919 Hybrid is Porsche’s first venture into the prototype ranks in more than 15 years, and carries a 4 cylinder petrol engine coupled with two energy recovery systems which makes an approximate 500 horsepower.

“The challenge is to show the best amount of performance with a limited amount of fuel,” said Matthias Muller, the Head of Porsche AG.

“Our thanks go to everyone who helps put these Porsche race cars into the world's toughest and most famous races.”

New regulations limit prototype teams amount of energy to be used by the car, thus creating an environment in which teams must utilize electric motors as well as conventional gasoline engines.

The program, which Porsche has billed as "2014, Our Return" is finally complete, and with the car unveiled and the driver lineups already announced, the car will go through its final test with competitors on track in Sebring and Paul Ricard at the end of the month.

Check out more photos of the car here: Porsche 919 Hybrid

Audi, Porsche and others test at Sebring this week