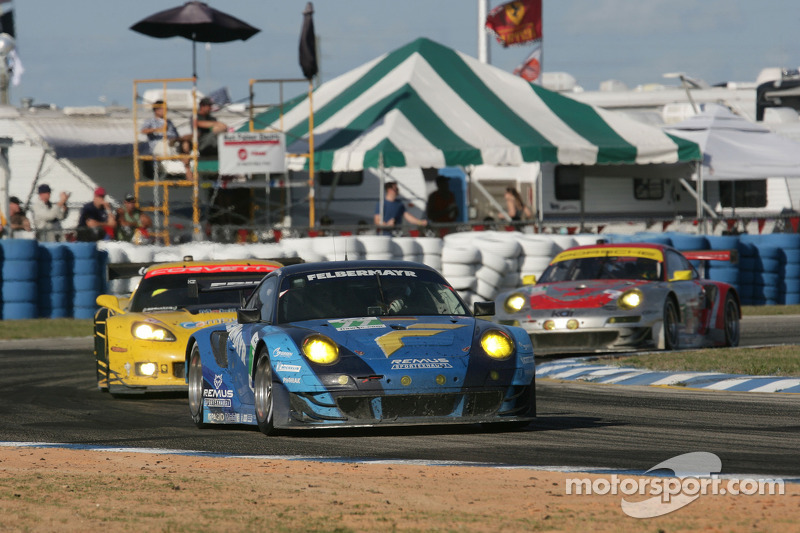 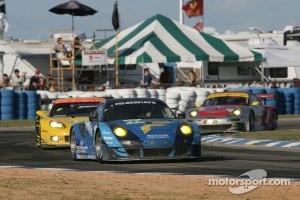 Sebring, Fla. - March 17 – Debuting a new race caris always a challenge, but doing so at America’s roughest sports car circuit is enough to humble even a proud champion like Porsche.

In WEC GT-Am, the #88 Porsche 911 GT3 RSR of team owner Christian Ried, Gianluca Roda, and Paolo Ruberti won the class that allows no more than one professional driver and requires the use of last year’s car.

“Porsche’s compliments to the Felbermayr – Proton team for their victory in WEC GT-Am class and second [lace in GT-Pro class. This was nearly an optimum result for our GT3 RSR, exceeding our reliability expectations. Our expectations for speed were not completely fulfilled, and we will analyze that gap to determine whether the performance balancing influenced this difference,” said Hartmut Kristen, head of Porsche Motorsport worldwide.

“I also want to congratulate Paul Miller Racing for its great finish in the ALMS class, as well as the #044 Flying Lizard Porsche and the #17 Team Falken Tire Porsche for their efforts. It was a pity that the #45 Flying Lizard Porsche was damaged by another competitor even before the race began – it was not the team’s fault, and they fought for the whole race to gain some valuable points,” said Kristen.

The Porsche story in ALMS was not quite as happy, but the four Porsche 911 GT3 RSRs each had their own success stories before the race was over.

“We didn’t have the fastest car this weekend and we knew that going in. Our philosophy was to just keep the car clean and we were able to stay true to that. The car was untouched when I took it for the last stint. This is just such an accomplishment in itself. In a 63-car entry, 12 hour race it was really difficult out there working the traffic. The guys put together a car that just ran consistently every lap. We didn’t have any major hiccups and whatever mistakes we did have, we were able to come back from it. I am really proud of Dunlop. For the first iteration of the tire and for this being the only Porsche RSR in the world that it is on is a tremendous accomplishment. The team called an amazing fuel strategy. My reserve light came on on the last lap. It was exceptional. There is a lot for us to feel proud of and to look forward to this season in terms of the car and the tire,” said Bryce Miller.

“We are very pleased with the result. We were struggling all week with pace and we knew our only chance to finish well was to stay out of trouble and that is what we did. Paul Miller Racing prepared the car so well that we didn’t have any issues. The Porsche was running flawless and the Dunlop tires gave us very consistent lap times,” said Maassen.

Rob Bell pointed out that the team knew they would not win the race on pace.

“It was out the question really. It was the first time we had run a Porsche on Dunlop tires and it takes a while to gel. It’s great to see the guys finish well. It’s a good springboard for the team for the rest of the year. With any luck you’ll see me at Petit Le Mans at the end of the year and they will have done lots of hard work and we’ll come in and look like heroes in the end. It was great to be a part of this effort,” said Bell.

“We’re ecstatic at the result. It was a little frustrating that we couldn’t compete on pace. We just had to be smart, run on pace and stay out of trouble. I am very proud of my team. This car ran great from start to finish. The drivers did a great job. So many teams made mistakes today and we feel like we did everything we could do to make the most out of this race. The tires and the car aren’t quite matched-up perfectly yet so we still have some development work to do but we’re ecstatic about the result today,” said owner Paul Miller.

The other two ALMS GT Porsches showed flashes of brilliance, but each suffered major setbacks which prevented them from gaining a top final position.

The #45 Flying Lizard Porsche of Patrick Long/Joerg Bergmeister/Marco Holzer was punted from behind before they even reach the start line when the green flag dropped. Rear suspension and under tray damage caused them to lose 26 laps in the garage right at the beginning of the race. Then, probably as a result of that accident, they spent another 13 laps in the garage fixing a gear sensor, and finally, in the last hour, went back to the garage with a cracked sub-frame. In the interim, the car ran well enough to complete 70 percent of the winner’s laps and score tenth-place points (four plus one or five points).

Seth Neiman, team owner of the #44 and #45 Flying Lizard Porsches, and driver of the #044 car, describes the mixed experiences of the day.

“The 45 car had a rough day getting 20 laps down before the race started due to an incident. The crew, the strategist and the drivers pulled it together and despite numerous problems coming from that crash managed to cross the 70 percent mark and get some good points for the championship,” he said.

“On the other hand, the #044 car had a great inaugural run for the new RSR and the new Michelin tire. Sebring, as always, was an unbelievably challenging week and day and last hour and last lap. Darren and Andy both did a spectacular job as did the entire crew,” said Neiman.

“A great experience for my first race as a Lizard. I was honored to be a part of the team. We had a car that we beat the heck out of all day long and it took every bit of abuse we gave it at the harshest racetrack in North America. That’s a testament to the hard work these guys have been doing. I had a blast in the car myself and topped it off with an exciting last half-hour charge to try and get one more position. I’ve got to thank my teammates, the teammates on the 45, all the guys that have helped point me in the right direction with these cars and how to learn them and what these cars like,” said Lally.

“I have to thank everyone on the 44 team. They did a great job on the car. Porsche has done a great job with the new car. We still have a lot of work to do. These guys persevered. It’s a tough, tough race. Even just to finish this thing is an accomplishment and we’re happy to come away the way we did and we got some good points out of it as well,” said Law.

The #17 Team Falken Tire Porsche’s trouble started in morning warm-up on Saturday when the team lost their engine only 90 minutes before the start of the race. Miraculously, the team replaced the engine in time to start the race from the pits when the green flag dropped, and were in contention for a top spot when they discovered a broken engine mount, sliding them further down in the field. But the team hung in for an eighth-place ALMS finish (seven points).

"What a crazy race," Dion von Moltke said. "A great one-two finish for Alex Job and the team. Thanks to Battery Tender, William Rast and PR Newswire for all of their support. Bill and Townsend did an amazing job all day. I had a scare with two hours to go when I got hit in Turn 17. I had to push the last two hours and was able to get a gap, make the last stop and bring it home for the win. The car ran flawless all day. The crew put a great car under us, and we delivered."

"We are drinking champagne on top of the podium," Bill Sweedler said. "This is our last GTC race before we break-out our new GT car at Long Beach and what a way to go out. It is just unbelievable. Dion is spectacular, what a driver. Townsend did a great job. The team put together an awesome car and what a day! It couldn't have gone better. What a memory - 12 hours of Sebring winners."

"I double stinted the first time out," Townsend Bell said. "The car was pretty good. I learned the hard way about flat spotting a tire really bad. I pitted and went back out and ran well. The second stint I pieced it all together, put in some good laps and got us the lead. It was my first sports car weekend, and it was fun. It was great to watch Dion and Bill bring it home. I was really impressed with the way Dion ran. He is a special talent. I am really happy with the way the week went. This is a great way to start off our relationship."

"What a day," Alex Job said. "Dion did an excellent job all day. He ran fast laps and was really clean. He got hit in Turn 17, but kept his cool, and we got him back out. Townsend, for his first sports car race, is a true professional. He worked with the guys on data and was able to go to school on endurance racing for a week. This will payoff for us the rest of the season. Bill has been with us for three years, and it is great to celebrate a win at the biggest race of the season with him. A great job all around by the team and drivers today."