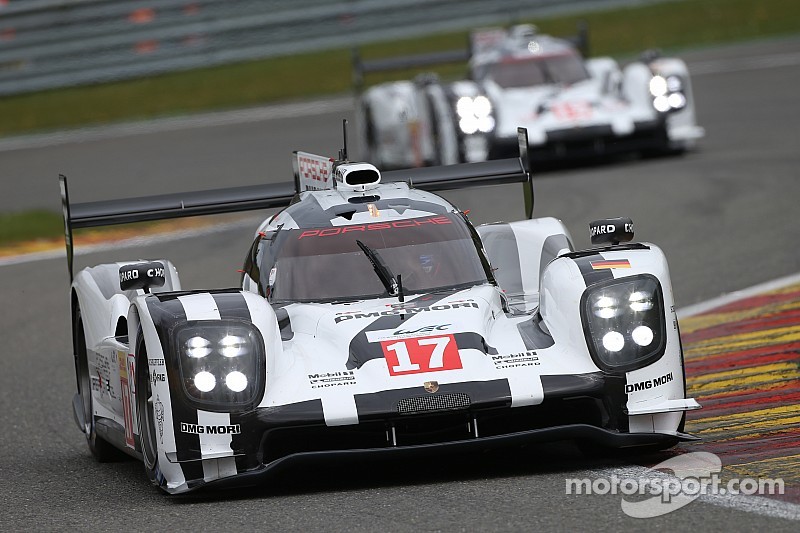 Porsche dominated the qualifying session for tomorrow’s second round of the World Endurance Championship at Spa, claiming a 1-2-3 sweep with its 919 Hybrids.

The #17 car of Timo Bernhard, Mark Webber and Brendon Hartley followed up their Silverstone pole after setting a scintillating average lap speed of 1m54.767s.

After taking pole, Bernhard was quick to pay tribute to his hero Stefan Bellof, who died at Spa in 1985.

“This is really a special and a great moment to pay tribute to Stefan Bellof,” said Bernhard, who is racing in a replica Bellof helmet this weekend. “He was a great idol of mine and I think he would be proud of what Porsche achieved today.

“It is a perfect start for us as we head in to the race tomorrow. It shows we have a quick package but we know how tough the opposition is here in WEC.”

Bernhard set a time just 0.024s quicker than his teammate Brendon Hartley in the car to confirm the 919 Hybrid’s superiority in qualifying trim.

Nico Hulkenberg will start his endurance racing debut from second place as he and teammate Nick Tandy finished the session just 0.258s behind the sister #17 Porsche. The #18 car of Romain Dumas/Marc Lieb and Neel Jani will start third.

The closest challengers to Porsche were again Audi, with its R18 e-tron quattros in fourth and fifth respectively with the low-drag-spec LMP1 cars.

Toyota struggled in the qualifying period and was nowhere near the pace of the Porsche and Audi LMP1 cars. The #1 and #2 cars will start sixth and seventh respectively, but are expected to have better race pace than they showed in Silverstone.

More success for G-Drive in LMP2

G-Drive Racing celebrated a second pole in as many races in LMP2 with Julien Canal and Sam Bird setting the best average two laps of 2m07.761s in the Ligier JS P2.

The KCMG ORECA 05 of Matt Howson and Nicolas Lapierre will start second in class. The Nissan-powered LMP2 coupe were in P1 going in to the final stages but were ultimately outpaced by Canal’s times on fresh tyres in the final few laps. The gap between the top two in class was just 0.3s.

The #99 Aston Martin Vantage V8, driven by Fernando Rees and Richie Stanaway in qualifying,  will start from pole position in the LMGTE Pro class. They beat the reigning champions Toni Vilander and Gianmaria Bruni in the #51 AF Corse Ferrari by just 0.070s, as the Ferrari took time to get its tyres up to optimum temperature.

The LMGTE Am class pole fell to the #98 Aston Martin Racing duo of Paul Dalla Lana and Pedro Lamy to make it a double pole celebration for the British constructor.

The Canadian/Portuguese pairing set an average of 2m19.578s, with an outright fastest time set by Lamy of 2m16.642s.

The 6 Hours of Spa is scheduled to take place tomorrow at 14.30 local time.