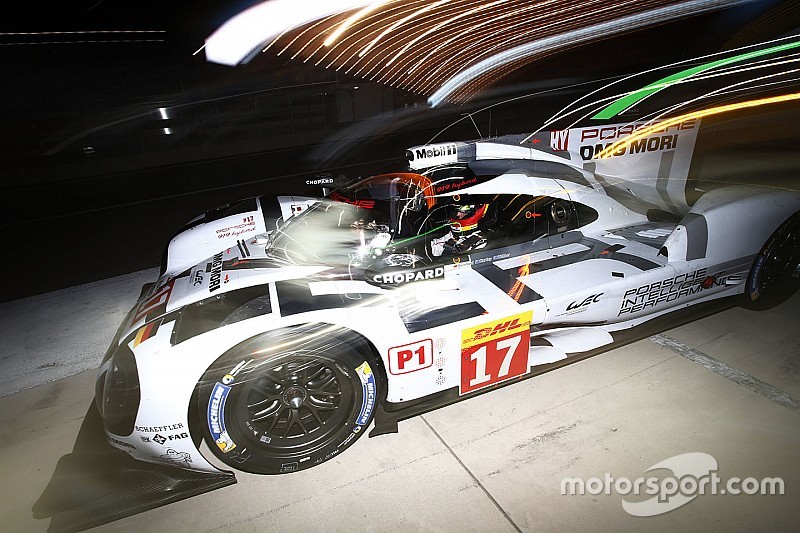 Porsche’s Timo Bernhard left it late to topple a renewed challenge from Audi in the second practice session for this weekend’s Six Hours of Circuit of the Americas in Austin, Texas.

The second session was held in darkness from the start, although the air temperature stayed in the high 80s. The majority of Saturday’s race will be held after sundown.

Marc Lieb set the early pace in the No.18 Porsche on 1m48.320s, half a second clear of Andre Lotterer in the No.7 Audi. Mark Webber moved the No.17 Porsche into second, a third of a second off the sister car.

Di Grassi then slammed in a new fastest time overall, a 1m47.684s with half an hour of the session remaining.

But Porsche was not to be denied, with Bernhard setting the fastest time in the closing moments of the session, a 1m47.442s that was two-tenths off the fastest time from the daylight session this afternoon.

Di Grassi stayed second, with the Porsche No.18 third and No.7 Audi in fourth.

The No.2 Toyota was given two 5-minute penalties for repeatedly transgressing the track limits. There was more misery for Toyota when its No.1 car was also similarly penalized for consistent track-limits abuse.

Even more worryingly, the No.1 car is now under investigation for ‘driver behavior towards an official in pitlane’.

The KCMG Oreca-Nissan 05 was fastest in LMP2 in the hands of Nicolas Lapierre, but also warned for abusing track limits.

In LMGTE Pro, Patrick Pilet set the pace for Porsche in the No.92 car, ahead of the No.71 AF Corse Ferrari and the second No.91 Porsche.

Victor Shaytar was fastest in LMGTE Am in the SMP Racing Ferrari.