OAK Racing made an excellent start to their 2013 FIA World Endurance Championship campaign at the 6 Hours of Silverstone today by finishing second and fifth in the LM P2 class, while the team’s non-WEC entry was eighth. 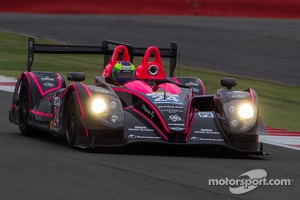 The French squad’s #35 sister car driven by Bertrand Baguette, Martin Plowman and Ricardo Gonzalez had also looked like a podium candidate for much of the race but was ultimately denied by a starter motor issue during one of its pit-stops. The five minutes lost would prove costly late in the race when fading tyres rendered Plowman helpless to hold on to third.

A post-race one-lap penalty for the #41 Greaves Motorsport Zytek-Nissan has seen OAK Racing’s #35 promoted to fourth in class at today’s 6 Hours of Silverstone.

Meanwhile two punctures and a gearbox problem hindered the efforts of team owner/driver Jacques Nicolet and Jean-Marc Merlin as the pair battled to finish eighth in class.

Sébastien Philippe, OAK Racing Team Principal: “It’s been a good start to the year but we are a little bit frustrated with the overall performance. The #24 car had a good race and the result probably matches our performance. Delta-ADR were that little bit quicker today and they deserved to win.

All three cars struggled with front tyre degradation so we know there is more to come. With #35 we had to take a big risk strategy-wise after the starter motor problem, which nearly paid off. Without losing those five minutes it would have comfortably been on the podium.

Meanwhile the #45’s gearbox issue was another example of our frustrating day. Fortunately we know the car has good pace so we’ll look to rectify those small areas that cost us before Spa.”

David Heinemeier Hansson, #24 Morgan-Nissan LM P2: “It’s great to start the season with such a strong result and score decent points for the championship. We’ll need to refine our set-up for Spa as I didn’t feel we could fight as hard as we might have, so with that in mind we’re very happy with a podium today.

I actually finished fourth in this car on my WEC debut at Spa last season so if we can make some progress between now and then we should be in good shape to fight for victory again.”

Ricardo Gonzalez, #35 Morgan-Nissan LM P2: “Strategy-wise we had some bad luck with the weather when it began to rain just at the wrong moment, which meant we missed the window for wet tyres. But in truth it was the starter motor problem that cost us a podium today. The car had good pace but was a little bit nervous at the rear, which is something we’ll need to work on for the next race.”

Jacques Nicolet, Team Owner/driver of #45 Morgan-Nissan LM P2: “I felt great in the car, which had good pace and gave me a lot of pleasure to drive. Having to stop for 30 minutes due to a gearbox problem obviously wasn’t ideal but I prefer to focus on the positives like Jean-Marc’s debut in LM P2.

He was professional, made no mistakes and didn’t risk the car, but managed to progressively increase his speed, which is very important for his development.

It gives us a lot of confidence for the next race. So overall I am happy with how the weekend worked out, especially as there was only two of us to share the driving.”

Round two of the FIA WEC comes from the historic Spa-Francorchamps circuit in Belgium on May 3/4.

Stunning Strakka stung by back marker at Silverstone