Nick Leventis: “The main purpose for us at Spa was to bring the car home and score WEC points."

Strakka Racing finished 3rd in the FIA World Endurance Championship LMP1 Privateers’ category at the 6 Hours of Spa-Francorchamps, achieving its pre-race aim of a points-scoring finish with its ultra-reliable Honda Performance Development ARX-03c.

This was despite losing almost a lap to its class rivals with an unfavourable Safety Car deployment and losing additional time in the pits replacing the rear bodywork panel, after the #35 LMP2 car accidentally hit the back the Relentless Energy Drinks-supported LMP1 car. 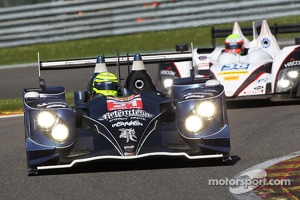 The Silverstone-based team’s all-British driver line-up of Nick Leventis (London), Danny Watts (Buckingham) and Jonny Kane (Thame) was able to enjoy 161 laps of dry running at Spa, gathering vital data ahead of its next race, the Le Mans 24 Hours (22/23 June).

With 20ºC air and 33ºC track temperature, Jonny made a clean start from 8th overall/3rd LMP1 Privateer to hold position. He came in as planned after 21 laps to hand over to Danny, but no sooner had he got into his rhythm, than car #25 (running immediately behind) spun into the barriers at Eau Rouge.

As the queue formed behind the Safety Car, Danny was unlucky to lose the best part of a lap to Strakka’s LMP1 Privateer rivals, Rebellion, who was able to complete almost a full lap before joining the Safety Car convoy.

Later, whilst in a line of traffic braking for the Bus Stop corner, car #35 ran into the back of Danny – although Strakka cleverly waited until the next scheduled pit stop to replace the damaged rear panel.

Nick carried on the momentum with an excellent middle stint, carving his way through the backmarkers and pushing hard to enable the team to be in a position to benefit from any problems ahead. Which is precisely what happened, as Strakka moved up to 7th overall when the #7 Toyota retired.

Nick Leventis: “The main purpose for us at Spa was to bring the car home and score WEC points. We were careful, stayed out of trouble and were pretty much on our own for the entire race.

We knew after qualifying that we weren’t going to be able to challenge for LMP1 Privateer victory, yet we were still unlucky to lose a lap with the Safety Car and time repairing bodywork damage, neither of which was through fault of our own.

We have work to do moving forward towards Le Mans and the rest of the season, and we’ll be working hard to get more pace out of the car. But we’re moving forward confidently and with typical Strakka spirit we’ll be aiming for victory and double WEC points at Le Mans.”

Jonny Kane: “Our race pace was a little bit closer than we’d had in qualifying and the car felt really good, so a lot of positives have come out of the Spa race and it’s very encouraging.

The car felt well balanced, had good grip, ran faultlessly and I had no issues whatsoever. Le Mans is a completely different story, because anything can happen in a twenty-four hour race.

I can’t wait to get testing there, because the low-drag kit has always been very strong for us around there and we’re confident that will bring us another step closer.”

Danny Watts: “To finish on the podium and score our first points of the season was a great achievement. Spa is a difficult circuit to get a good car set-up, and we had a great set-up for the race.

Our car lacked a little bit of overall pace, but I never had any issues in my stints – except when I almost got wiped-out by an LMP2 car at the Bus Stop! There was rear bodywork damage, but it didn’t cause any problems to the aero, so I kept going. At the end of the race I was following Sébastien Buemi in the Toyota – he was a carrot on a stick to me and was fun to chase! I really enjoyed the race, we’ve learnt a lot about the car and we’ll now head to Le Mans with a solid points-scoring finish under our belts.”

Dan Walmsley, Strakka Racing Team Manager: “It’s been a really challenging race weekend and we’ve made massive progress with the car. The drivers are all happy with the way it handles on track, although we are lacking some pace and that’s what we’ll be focusing on between now and Le Mans.

Everyone in the team has been fantastic. We were missing our chief mechanic, Paul Stephens, who’s recovering from an operation, so the guys really pulled together well and Jay Davenport chief engineered a car from a clean piece of paper to a great race car this weekend.

All three drivers played their part too; it was a busy race track and we managed to avoid everything we could and the LMP2 car that hit us was purely accidental on their part. We’re now looking forward to unlocking more pace with our car and taking the fight to Le Mans.”