The ORECA 03 took its fifth victory of the season, the third in four rounds of the FIA World Endurance Championship 2013 season. The prototype designed in the ORECA stables had never won in Brazil, but now it has. G-Drive Racing by Delta-ADR won the 6 Hours of Sao Paulo after running a perfect race. In fact, Mike Conway, Roman Rusinov and John Martin took the hat-trick : the win, pole position and fastest lap of the race. This excellent performance was complimented by a podium finish for Pecom Racing, with Nicolas Minassian, Pierre Kaffer and Luis Perez Companc taking third place in their ORECA 03. These two cars were powered by Nissan V8 powerplants prepared in the ORECA engine department at Magny-Cours. 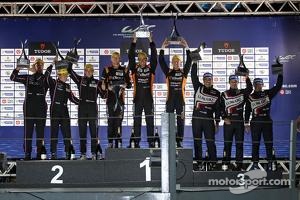 Since the start of the season, the No.26 ORECA 03 of G-Drive Racing by Delta-ADR had consistently placed in the top spots. Unfortunately, Mike Conway, Roman Rusinov and John Martin had, until now, been unlucky. This time, with a flawless strategy from the team, the three drivers dominated the race from start to finish to take a perfect win. After taking the pole on Saturday – the third pole for an ORECA 03 in FIA-WEC this year – Mike Conway started the race in the lead and built a gap to the nearest competitors, before giving his place to Roman Rusinov then John Martin. For six hours, the trio never gave up the lead to take the checkered flag as winners of the 6 Hours of Sao Paulo.

« At last ! » exclaimed Simon Dowson, team manager at G-Drive Racing by Delta-ADR. « I’m happy to bring G-Drive its first win in LM P2 (the No.25 had won at Silverstone under the Delta-ADR banner). The two cars were quick this weekend and the No.25 was unlucky, experiencing a few issues. The ORECA chassis worked well, the car was easy to drive and kind to the tires. We proved this by being able to double stint with the Dunlop tires without a time loss. After that we just had to stay out of trouble. Mike, Roman and John deserved this win and the car ran faultlessly. Now, we need to keep this momentum for the rest of the season. »

Second at the start, Pecom Racing spent a good part of the race in second place in LM P2 before giving up a few positions due to pitstop shuffling. After attacking at the end of the race, Nicolas Minassian, Pierre Kaffer and Luis Perez Companc finished on the third step of the podium. With the finish, the Argentinian team’s drivers conserve their chances in the title fight as Nicolas Minassian confirmed: « We had a solid race, with a car and Michelin tires that were competitive, but we lacked a little something to take the fight to G-Drive Racing. They were untouchable this weekend. Nonetheless, we took home important points in the championship. There are still four rounds left this season and we’ll do everything we can to take the title ! »

Before the race, Hugues de Chaunac had alluded to the strong character of the teams running the ORECA 03. They showed it once again by taking the win, with Interlagos being added to the long list of successes for the French prototype. « We are of course overjoyed to see the ORECA 03 and our engine department take the win at a track as renowned and quick as Interlagos » said the President of the ORECA Group. « I’m very happy for G-Drive Racing, who have deserved this victory for a long time. It’s a great way to begin the final sprint toward season’s end and Simon Dowson’s team made it look easy. Pecom Racing continues its good season with another podium and remains in the fight for the LM P2 title. The next round of the FIA World Endurance Championship at Austin will be a very important rendezvous for many reasons. It could be a deciding round in the championship and it will be a nice event, run alongside the American Le Mans Series. At a time when we are looking very hard at what’s going on in the United States, we definitely want to shine with our customer teams. »

One week ahead of the 6 Hours of the Circuit of The Americas, the ORECA 03 chassis will see action at Budapest for the ELMS.