Pecom Racing crossed the finish line in first, for the Nicolas Minassian/Pierre Kaffer/Luis Perez Companc trio’s second success in the FIA WEC with the 6 Hours of Bahrain in 2012. 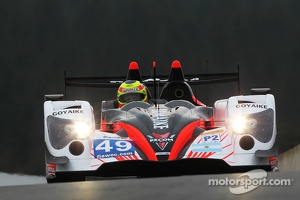 After signing the pole position the day before, the No. 49 ORECA 03 driven by Nicolas Minassian, Pierre Kaffer and Luis Perez Companc took over the lead in the LMP2 class after the first hour of racing, and never relinquished their advantage.

With the win, the three drivers are now in the lead in the standings, and the ORECA 03 takes its second success in as many races, after G-Drive Racing by Delta-ADR’s win at Silverstone. Competitive, the Simon Dowson-led team had a busy race: despite an off track excursion, the No. 26 of Martin/Conway/Rusinov finished fifth, while the No. 25 of Pizzonia/Walker/Graves retired after an accident.

Luis Perez Companc (Pecom Racing, ORECA 03-Nissan #49), 1st LM P2 : « We were a little worried at the end but we thought the Zytek would need to pit again. We have a good team, good engineers, and they all worked well today. We knew as well, even before the start of the season, that we had a good car and that we would be in position to fight for podium finishes.

In addition to the World Endurance Championship, our goal is to prepare for Le Mans, which is important for us. Aside from the tire puncture, the race was perfect. »

Nicolas Minassian (Pecom Racing, ORECA 03-Nissan #49), 1st LM P2 : « My first stint was very exciting ! It was a good battle with Olivier Pla. I had to be at the limit, without making an error! The team was excellent during the pitstop and I was able to rejoin the action in first place.

The safety car added to our lead : sometimes it’s in your favor, and that was the case today. The Michelin tires worked well and the ORECA 03 was again competitive, reliable and strong. I’m very happy with this weekend that was positive on all fronts. »

Simon Dowson (Team Manager G-Drive Racing by Delta-ADR, ORECA 03-Nissan #26), 5th LM P2 : « Our race was not easy, but the team once again did a very good job, notably in returning the car to action after the accidents we encountered.

We learned a lot and it will help us for Le Mans. We now have a lot of work to rebuild the car, but I’m certain that we will have good support from ORECA. The performance level was good and I hope Le Mans will be better for us. »

Starting from the pole position, Pecom Racing found itself in second place after the first lap. Behind the wheel of the No. 49 ORECA 03 Nicolas Minassian attacked and stayed within reach of the leader and pressuring him. Starting fifth and sixth, the two G-Drive Racing by Delta-ADR cars both gain one position, but a little after a half-hour of racing and Antonio Pizzonia makes an error in the No. 25 while trying to avoid a GT car. Competitors made their first pit stops and Pecom Racing rejoined the race in the lead, extending their lead as the laps continue to unwind.

As the first hour came to a close, the safety car made an appearance on track after Pizzonia and the No. 25 went off track at Eau Rouge.

With the return of the green flag, fifteen minutes later, Nicolas Minassian had nearly a lap lead on second place, while Mike Conway, having taken over in the No. 26 ORECA 03 tried to close the gap to competitors. He made his way from fifth to third position before the end of the second hour, then up to second place by halfway !

Pecom Racing kept the lead, with Luis Perez Companc driving, and Roman Rusinov took over for Mike Conway with a podium finish in mind. The Russian driver would hold his position until hitting the wall at « Pouhon ». He was able to pit and rejoined the race in seventh place after an 8-minute safety car period.

As competitors entered the last third of the race, Pierre Kaffer took over in the No. 49 ORECA 03. The German driver perfectly managed his stint before a tire puncture due to debris forced him to make an extra pit stop with less than 50 minutes to go. As a result, he fell into the grasp of the No. 38 Zytek and No. 24 Morgan.

In the end, Pecom Racing crossed the finish line in first, for the Minassian/Kaffer/Perez Companc trio’s second success in the FIA WEC with the 6 Hours of Bahrain in 2012. With a good finish, G-Drive Racing came home fifth with Martin/Conway/Rusinov.

Lotus Praga LMP2 second day at the 6 Hours of Spa