The Sarthe-based team has consolidated its status as a constructor in its own rights.

The publica,on of the official Automobile Club de l’Ouest’s lists confirmed Onroak Automotive’s impressive presence on the 2014 endurance scene. With four cars in the European Le Mans Series, five – maybe seven – in the Le Mans 24 Hours, and one in the FIA World Endurance Championship, the Sarthe-based team has consolidated its status as a constructor in its own rights. 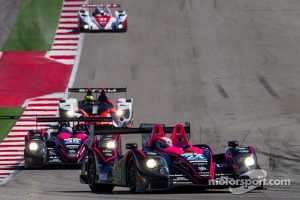 The year 2014 marks a key turning point in Onroak Automotive’s activities. The Morgan LM P2, which has met with great success, came out in 2012. Today, a brandnew closed prototype, the LM P2 Ligier JS P2, is about to turn a wheel for the first 8me, and is already on the list of entries for the greatest endurance race in the world  the Le Mans 24 hours !

This year the French constructor enjoys an impressive presence on the grid for the Le Mans 24 Hours, which has atracted no fewer than 17 LM P2s, with five chassis confirmed: three Morgan LM P2s entered by GDrive Racing, Newblood by Morand Racing and OAK Racing plus two Ligier JS P2s for Thiriet by TDS Racing and OAK Racing Team Asia. In addi8on, two more Morgan LM P2s are on the reserve list and have every chance of joining the field for the race itself: first reserve, Larbre Compe88on and Pegasus Racing. This year, five constructors and six models will be at Le Mans in the LM P2 category including the brandnew Ligier JS P2 from the constructor Onroak Racing, thanks to which the legendary French make is making its Le Mans comeback.

Larbre Competition, Newblood by Morand Racing, Pegasus Racing and Thiriet by TDS Racing will also fly the brand’s flag in the European Le Mans Series. It is a fantastic challenge for Onroak Automotive to race in an LM P2 field, which consists of no fewer than 13 cars entered for the whole European Series Championship.

Jacques Nicolet, Onroak Automotive President: “As a constructor I’m very proud to see the presence of our Morgan LM P2s and Ligier JS P2s in all the endurance championships: the Asian Le Mans Series, the ELMS, the Tudor USCC and the WEC. I’m particularly delighted that the Onroak Automotive cars will race in different kinds of configurations: Judd, Honda Performance Development and Nissan engines and on Continental, Dunlop and Michelin tyres .”

Allmendinger on MSR Acura: “You just have to trust the grip”