One objective for the ORECA 03 in Brazil: victory!

The return to the fight for first place starts with the 6 Hours of Sao Paulo, marking the return of the FIA World Endurance Championship.

Victorious at both the 6 Hours of Silverstone and 6 Hours of Spa-Francorchamps, with pole position each time, the G-Drive Racing by Delta-ADR and Pecom Racing ORECA 03 entries did not have the same success in the 24 Hours of Le Mans. Competitive in La Sarthe, these two teams are still in the race for the FIA Endurance Trophy in LM P2. The return to the fight for first place starts with the 6 Hours of Sao Paulo, marking the return of the FIA World Endurance Championship.

Team still as solid as ever… 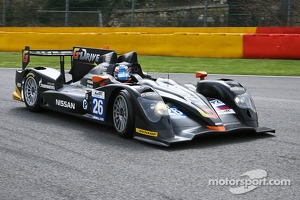 Winners in the opening round at Silverstone, G-Drive by Delta-ADR will again enter two ORECA 03 chassis in Brazil. The driving squad in the No. 26 remains unchanged, with Roman Rusinov, Mike Conway and John Martin behind the wheel, but the drivers in the No.25 will change. Tor Graves will be joined by James Walker, the team’s reserve driver for Le Mans, and Robbie Kerr, who makes his debut with the team managed by Simon Dawson. After winning at Spa and finishing in the top five at Le Mans, Pecom Racing continues in the same direction : Luis Perez Companc will be joined by regulars Pierre Kaffer et Nicolas Minassian. Three other solid driver line-ups, composed of some of the quickest drivers in the discipline as well as experienced gentlemen drivers, will logically fight for the victory in LM P2. The class with the most entries is also the most competitive, with no fewer than four different constructors represented !

Taking a page from Thiriet by TDS Racing’s success, winners at the 3 Hours of the Red Bull Ring in the European Le Mans Series in July, these three teams will be looking to take advantage of the return to action to taste victory champagne, and in the process perhaps take the championship lead. These three ORECA 03 entries will be powered by a Nissan V8 prepared in the ORECA engine department at Magny-Cours.

Hugues de Chaunac : « We can count on strong teams… »

Winner in four of the last six races this season in endurance (ELMS and FIA WEC), the ORECA 03 will once again be looking for victory in Brazil. The Sao Paulo track was the sight of a Pecom Racing podium finish last year. With five rounds to go, anything is possible, confirms Hugues de Chaunac, president of the ORECA Group: « As a constructor, we want to get a better result at the 24 Hours of Le Mans, of course. But the season is long and the next races have their own set of challenges. The FIA Endurance Trophy is far from being decided in LM P2. We have to stay on a positive dynamic, thinking about the success we had at Silverstone and Spa. We can count on strong teams, with many qualities, and I don’t doubt for a second that they will be very determined at Sao Paulo. As always, we will be behind them in support. This title is an important goal for the ORECA constructor activity as well as our engine department. Our goal is clear : take the title and share it with our custormer teams. Last year the ORECA 03 was competitive at the Interlagos circuit and victory was within reach. Our prototype has proven its level of performance and reliability on all types of tracks, so the mission is simple : victory . »

Free practice will begin on Friday, before qualifying on Saturday, August 31 at 8 :10pm (France time). The start of the fourth round of the FIA World Endurance Championship will be given on Sunday, September 1 at 5pm (France time).