The 6 Hours of Silverstone begins at midday local time tomorrow. 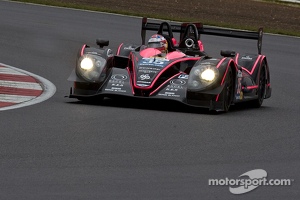 According to this year’s revised regulations two drivers from each car must set a minimum of two flying laps each, before their fastest efforts are averaged to determine an overall grid position.

This new system, combined with a wet track that dried throughout the 20-minute session, ensured qualifying became something of a lottery for everyone.

The conditions ultimately worked in favour of Olivier Pla and Alex Brundle, however, whose 1m57.629s aggregate time set aboard the #24 Morgan-Nissan LM P2 would prove fast enough for second in class after a late effort from Delta-ADR denied the pair pole position.

Sébastien Philippe, OAK Racing Team Principal: “It was important that we didn’t hesitate when making a decision on tyres because you have to run the whole session in order for both drivers to complete their flying laps. We took a chance on the cut slicks, which ultimately appeared to be the correct choice.

But even so, with this format you also need luck in traffic. Fortunately it worked out well with second and fourth positions for the full-time WEC entries. It wasn’t so good for #45 but, to be honest, over a six-hour race grid position doesn’t count for everything.

We have good raw pace but the weather will play its part tomorrow. The conditions have been very tricky over the past couple of days.”

Olivier Pla, #24 Morgan-Nissan LM P2: “I was one of the first on-track and encountered the trickiest of the conditions on my opening lap. There was a drier line on my second run so I could push harder but, honestly, it was so difficult to find the limit.

Alex also did a good job but there’s no doubt that the improving conditions really benefitted Delta-ADR. So with that in mind I’m very pleased with our second place. I think we’re in for a good race tomorrow.”

Bertrand Baguette, #35 Morgan-Nissan LM P2: “The combination of a new qualifying format and unpredictable weather made for a very difficult session. We had to switch to cut slicks just before the start and the guys did a good job to get everything ready quickly, because the new format means you cannot afford to lose time.

Most of our running has been in the wet this weekend but I’m expecting a dry race so it’s difficult to predict how we will do. The car does seem quick though, so I’m hopeful.”

Jean-Marc Merlin, #45 Morgan-Nissan LM P2: “It was a really hectic qualifying session with rain appearing just as the green light came on, and then the track drying very fast in the windy conditions.

We elected to make the driver change a lap too early, which cost us a lot with the average lap time calculation. It will be an interesting start for Jacques tomorrow in the middle of the GT pack but it is a very long race.”

The 6 Hours of Silverstone begins at midday local time tomorrow.

Lotus Praga LMP2 second day at the 6 Hours of Silverstone