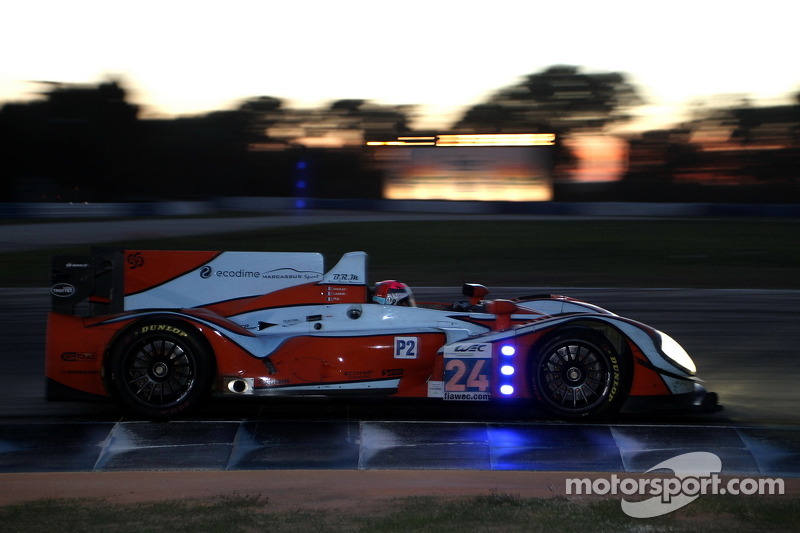 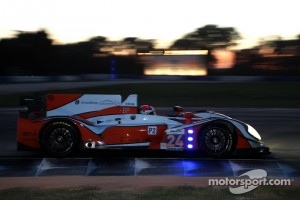 OAK Racing began its FIA World Endurance Championship campaign in encouraging fashion at the 60th Anniversary 12 Hours of Sebring in Florida on Saturday night with an excellent LMP2 class podium finish providing some consolation for the retirement of its LMP1 entry.

The all-French crew of Jacques Nicolet, Olivier Pla and Matthieu Lahaye delivered a fast, consistent and faultless combined performance aboard the #24 Morgan 2012 LMP2 to finish as runners-up in the WEC classification, as well as a remarkable fifth overall, on the car’s race debut.

Spurred on by Morgan Motor Company CEO Charles Morgan, Pla initially demonstrated the car’s potential in qualifying by grabbing class pole position before proving it was no fluke with the fastest LMP2 lap of the race.

And despite having to ultimately settle for second, the result ensures that OAK Racing travels to the second round at Spa-Francorchamps with significant points already on the board.

Sadly the same cannot be said for the #15 OAK-Pescarolo LMP1 which retired with engine failure just after the nine-hour mark.

After demonstrating its raw pace by qualifying fifth overall, Guillaume Moreau was forced to start from the tail of the 60+ strong field following the car’s failed stall test at scrutineering. It did not take the rapid Frenchman long to recover the lost ground however, handing over to Bertrand Baguette having climbed back up to where he should have started.

Making his prototype racing bow after a successful single-seater career, the Belgian ace’s faultless and consistent triple stint was followed by Dominik Kraihamer’s own OAK Racing debut. It would start in unfortunate circumstances however when the Austrian was tagged from behind and sent helplessly spinning into the tyre wall. The resulting damage, although light, was sufficient to necessitate a pit-stop that cost further time.

With the car back up to speed it wasn’t long before a strong top-six overall finish looked likely, only for the engine to have other ideas.

Sebastien Philippe, Team Principal: “Obviously it’s great to start the World Endurance Championship with a podium finish which, along with Friday’s pole position, gives us a good points haul from the weekend. Having said that I think we had the car to fight for victory. With the high level of attrition it’s such a shame that the engine failed in the LMP1. All three drivers had done a fantastic job up to that point so I’m disappointed for them and the mechanics. They deserved a better result than retirement.”

Bertrand Baguette, #15 OAK-Pescarolo LMP1: “When you consider that we started from the tail of the field, we can at least be proud of bringing the car back into contention. We’ve shown that the car is competitive, very consistent and easy to drive, while Dunlop has also provided us with a good tyre. The pace is clearly there over the long stints. Without the engine failure a podium looked very likely with so many others hitting trouble. I’m obviously new to prototypes but I like driving big, powerful cars. I can’t wait to be back for another go at Spa.”

Olivier Pla, #24 Morgan 2012 LMP2: “It’s a great way to start our WEC campaign with second position here. For some reason the pace and handling were both very good during my daylight stints but tailed off towards the end of the race when I was not able to fight for the win. By the end I was just concentrating on getting the car to the finish as these points are very important for the rest of the season. I have to say the beginning of the week was quite difficult so this is a fantastic reward for the team following all their hard work. They’ve done an incredible job.”

OAK Racing’s WEC campaign will continue at the 6 Hours of Spa-Francorchamps in Belgium on May 5. Before then however it will be in LMP2 action at the season-opening European Le Mans Series round at Paul Ricard on March 31.